Posted on October 22, 2020 by chandlerswainreviews

In “Hand of Death”  poor John Agar stars as his latest incarnation of an actor impersonating a career scientist whose altruism is perverted with exponentially monstrous results as he operates with an alarmingly elevated level of negligence. After all 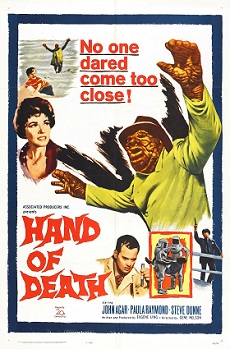 what are the odds if a movie scientist casually waves off warnings that his experiments are dangerous that he will shortly succumb to the very horrific side effects which are the predictable result of incautious laboratory protocols?

“Hand of Death” relies exclusively on the innate reliability of intellectual hubris to be sufficient catalyst for an otherwise apparently rational man to carelessly pour a container of a newly discovered toxic solution (a nerve agent of all things!) all over their extremities and then compound this offense of logic by mopping up the excess as if he were suddenly the subject in a paper towel absorbency commercial. The purpose of this total surrender of safety etiquette lies exclusively in the need to justify yet another example of Hollywood’s dim understanding of the purpose of the scientific community outside of providing a means to transform the quietest mixing of chemicals into a homicidal Hellzapoppin. But as Agar mutates from congenial lab hermit into a charcoal briquette stylishly accessorized  in a fedora and trench coat worthy of a sun-crisped Tor Johnson wandering in from a film noir set, it becomes apparent that his curious transformation, entirely avoidable or not, is predicated not on the demands of the story, but rather to account for the only audience hook to this otherwise tepid SF/horror afterthought.

To read the complete review, click the following link to: https://chandlerswainreviews.wordpress.com/chandler-swain-reviews-drive-in-cinema-2/

I've been a puppet, a pirate, a pauper, a poet, a pawn and a king, not necessarily in that order. My first major movie memory was being at the drive-in at about 1 1/2 yrs. old seeing "Sayonara" so I suppose an interest in film was inevitable. (For those scoring at home- good for you- I wasn't driving that evening, so no need to alert authorities.)Writer, critic and confessed spoiler of women, as I have a tendency to forget to put them back in the refrigerator. My apologies.
View all posts by chandlerswainreviews →
This entry was posted in Drive-In Movies, horror, John Agar, movie reviews, Movies, science, science fiction, writing and tagged Gene Nelson, john agar, science run amok. Bookmark the permalink.