Posted on December 24, 2020 by chandlerswainreviews

Clearly taking direction from the horror films of William Castle and employing vividly evident inspiration from his 1959 “House on Haunted Hill”, William Conrad’s 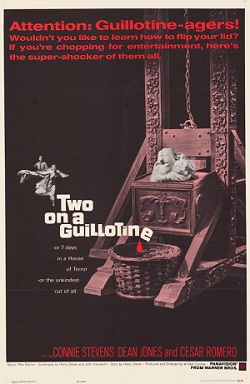 “Two on a Guillotine” is an example of attempting duplication of another’s success without attending to the original’s most glaringly problematic features.

Attending the funeral of her magician father, Duke Duquesne (Cesar Romero), young Cassie (Connie Stevens), who has been estranged from her parents for twenty years, exhibits a sufficient amount of neurotic fragility along with promising curves to attract the attention of reporter Val Henderson (Dean Jones), whose interest seems nakedly leaning toward amour rather than pursuing a Pulitzer worthy piece of journalism. Cassie learns that she will inherit her father’s entire estate as long as she commits to occupying his house for a week, a codicil which guarantees the issuance of a series of unexplained (but nonetheless predictable) moans and cackles that promote the illusion of a haunted house, but are quickly revealed as the machinations of an overly developed sense of theatrics. The not-so-mysterious nature of the spook house novelties sheds a temporary light of suspicion on two loyal longtime employees of Duquesne, who profess a disinterest in their being ignored in the apportioning of the estate, but who stand to split the fortune on the occasion of  Connie failing to successfully carry out the will’s conditions.

I've been a puppet, a pirate, a pauper, a poet, a pawn and a king, not necessarily in that order. My first major movie memory was being at the drive-in at about 1 1/2 yrs. old seeing "Sayonara" so I suppose an interest in film was inevitable. (For those scoring at home- good for you- I wasn't driving that evening, so no need to alert authorities.)Writer, critic and confessed spoiler of women, as I have a tendency to forget to put them back in the refrigerator. My apologies.
View all posts by chandlerswainreviews →
This entry was posted in Drive-In Movies, Movies, Mystery, Romance, writing and tagged Connie Stevens, Dean Jones, William Castle, William Conrad. Bookmark the permalink.