NIGHTS AT THE WHEATON PLAZA PLAYHOUSE

always welcome Carol White). In the course of realizing this wish, he and his gang will rob several stagecoaches, kidnap the wife of Army Colonel Morgan (Brian Keith), indulge in a bit of white slavery in order to steal a Gatling gun, hijack a shipment of whiskey which they then unlawfully deliver to an Indian tribe and slaughter an entire village filled with Mexican bandits. The film is presented as a comedy.

There are many problems with Andrew V. McLaglen’s “something big”, not the least of which is the film’s violent mood swings which appear to be by design, as if the screenwriter James Lee Barrett and the director (both also acting as producers, so the usual backstage alibi of executive interference seems unlikely) were unsure as the  direction they wished their opus to follow and instead decided to unwisely incorporate influences from a variety of forms within the genre. Both Barrett and McLaglen cut their creative teeth steeped in the traditional western form, and their desire to move beyond such a long standing comfort zone is admirable, though the resulting cut and paste quilt of styles seems an ill-conceived effort to appease genre 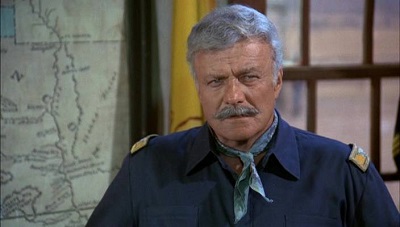 enthusiasts of every  stripe, yet producing a work almost guaranteed to please none.

The film does begin promisingly with a grizzled Denver Pyle in high-spirited argumentation with Colonel Morgan that is both sharply paced and genuinely funny; an opening salvo promising a humorously exaggerated version of cavalry and cowboys; material that was second nature to both the filmmakers and the cast of familiar veteran character actors: Pyle, Ben Johnson, Albert Salmi, Robert Donner, Ed Faulkner, Bob Steele, Harry Carey Jr. and Paul Fix. Had the film lived up to this early scene in poking at the familiar frontier types as portrayed by these performers over the years (especially those in the John Wayne repertory company of players, to whom both Barrett and McLaglen are inextricably 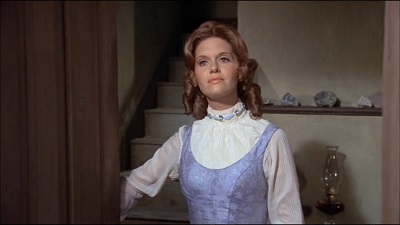 linked), it might have made for a fitfully amusing night at the cinema. Instead, the film meanders without any sense of immediacy, but clumsily touches upon irrelevant plot points that seem included only as familiar milestones with which the filmmakers seems to grant themselves a peculiar justification for self-congratulation. (For what? Seeing older films?) Thus, there is an extended sequence intended to recall the Fordian sentimentality between Capt. Brittles and Sgt. Quincannon in “She Wore a Yellow Ribbon”, down to comical drunken brawl that, in John Ford’s film, was intended to signify the roughhouse camaraderie of the troopers (as well as to amuse), but in McLaglen’s version the fisticuffs are awkwardly imposed without cause, simply to enliven his inert staging of the material. (That the lumpish non-actor Merlin Olsen is hardly a substitute for Victor McLaglen seems to be obvious to everyone but his progeny.) Similarly, the Gatling gun reinforced climax of the film recalls the apocalyptic battle concluding Sam Peckinpah’s “The Wild Bunch” in an act of arrogant homage that manages to

accomplish little except to expose how truly dreadful is the film’s direction. One might not expect the painstaking technical mastery  which Peckinpah brought to the table, but in “something big”, the attention to detail in the action scenes is particularly shoddy: with the Gatling gun spraying bullets to the right while the extras are falling on the left. The entirety of the film is a trip down a Memory Lane of better films, with references to everything from spaghetti westerns to McLaglen’s own flawed but superior “Bandolero!”.

However, nowhere does the film expose its inconsistency of intention more than in it’s treatment of women. Surprisingly, in a film where a good portion of the cast are treated as either subliterate jackanapes or craven scoundrels, the two prominent female roles-  that of Honor Blackman’s Mary Anna Morgan and Carol White’s Dove  -are conceived 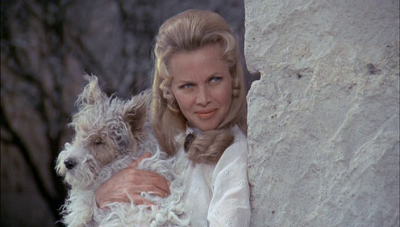 and played with an eye and ear for the quiet strength and dignity of the female’s gentler nature. In a scene that’s part confessional and part life lesson in practical romantic sensibility , Mary Anna explains to Baker the reasons for her extended absences from her husband with an insight that is poetic in its wisdom and understanding of the perils of the human heart. The scene is a truly lovely moment for the actress-  who is far more relaxed here in the Western milieu than in “Shalako” -an oasis from the bluster of the rest of the film which is almost crassly destroyed by being bookended by the film’s crudest invention: a pair of sex crazed sisters whose appetites for the carnal pleasures of men is rendered in such broadly exaggerated vulgar strokes, it only results in embarrassment for all concerned.

Dean Martin has often been criticized for walking through this role, though ease in the saddle is often mistaken for lazy performance temperament. (To observe an example of true professional somnambulism by Martin one needs look no further than any of his Matt Helm films.) Of special note is the performance of Ben Johnson who plays his role of an Army scout with a practiced low-key charm (he accounted for himself similarly in McLaglen’s earlier “Chisum”, making entertaining mountains out of the crumbs from which his character was written) which easily manages to invoke charm while retaining his dignity; often at risk but never surrendered to the precarious chasm of buffoonery with which the script intermittently imperils the actors.  The 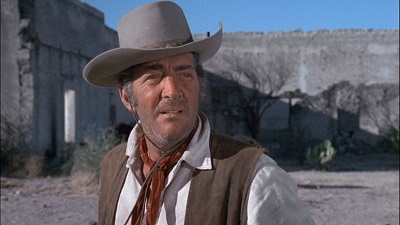 usually reliable Brian Keith is not as fortunate, with his performance becoming more stiff with defensive affectation with each new humiliation encountered.

Finally, there is the matter of the aural assault of Marvin Hamlisch’s anachronistic scoring which seems to mistake the Wild West for an airport cocktail lounge; though this continuous musical offense finds close competition for negative achievement with the perpetration (one can hardly call their work a “contribution”) of Burt Bacharach and Hal David in what must be the most heinously inappropriate song heard in any film since the disastrous Riz Ortolani–Doc Pomus ballad which disgraced the main title sequence of “Anzio”.

“The April Fools” asks the audience to believe in an instantaneous romantic attraction intense enough to make a two people discard everything in their lives, all the while mocking the ruinous relationship choices people make. The contradictions prominent in

Hal Dresner’s screenplay are not lost on director Stuart Rosenberg who seems rather desperate at times to send his penchant for visual gimmickry into overdrive in an attempt to masquerade the surprising shallowness of both the central romance and the loveless circumstances which make such agreeable case of dual infidelity so attractive.

Married investment executive Howard Brubaker (Jack Lemmon) celebrates his new promotion by attending a party at the apartment of his boss, Ted Gunther (Peter Lawford), who despite being married to the lovely Catherine (Catherine Deneuve) openly acts the lascivious playboy with his female guests. At Ted’s prodding, Howard inadvertently invites one of the guests to a drink, an invitation she unhesitatingly accepts, with Howard unaware that the young woman is actually Ted’s wife Catherine. They quietly leave the party and in the process of getting to know each other discover that they have much in common, including a mutual dissatisfaction with their respective marriages. In the process of the evening, what begins as a friendly attraction blossoms into love.

The film relies heavily on the audience’s willingness to root for the couple through their path to infidelity against their respective spouses, both of whom are portrayed as such irredeemably obnoxious characters, it has the opposite of the intended effect (to

make the lovers’ unfaithfulness understandable and acceptable), by making the audience question their judgment in picking such outrageously mismatched partners in the first place. If a film is attempting to convince that  intense emotional instincts of an extremely abbreviated courtship may result in a reliable long-term relationship, it hampers that faith if prior judgment is demonstrated to be so irretrievably wrongheaded.

Where “The April Fools” becomes problematic is that its meteoric love affair fails to convince. The film spends a generous amount of time illustrating the dysfunctional lack of emotional symbiosis in Howard and Catherine’s marriages, yet in illustrating the fusion of two romantic discontents seeking a sympathetic harmony, the screenplay never fleshes out the character beyond a surface attraction. Instead what we are treated

to are several repetitious scenes of revelry- making the film, for lengthy periods, feel like an extended Blake Edwards party sequence (the type where the women’s loose moral characters are … by ….   -that are used for little more than for Lemmon to run through his repertoire of exasperated incredulity, while Deneuve mainly responds with toothy amusement, though little of  consequence transpires emotionally between the two. For much of “The April Fools”, the pair stupidly placed in chaotic environs resistant to simple conversation; certainly not an incubator in

which to hatch emotional intimacy. Often the film seems to operate on the perverse notion that love is the prize at the end of a metropolitan tourist endurance test in libertinism. However, an even more bizarre encounter awaits in the company of a senior couple who inaugurate Howard and Catherine in the secrets of committed love with the use of tarot cards and a  boisterous round of slapstick fencing. That the seniors are played by venerable Golden Age stars Myrna Loy and Charles Boyer, whose very presence lends a welcome amount of respectability to roles that even under casual inspection make no sense.

The final third of the film shifts gears to introduce unrelated characters (including a drunken commuter with a penchant for foreign ladies, played with an appealing manic energy by Harvey Korman), resulting in an extended slapstick car race to the airport, but with the abundance of needless distractions, the romantic dynamic is depleted to the point where the finale seems flatly anticlimactic. Both Lemmon and Deneuve perform admirably but have no chemistry in this occasionally amusing but strangely passionless film.