Posted on May 13, 2015 by chandlerswainreviews 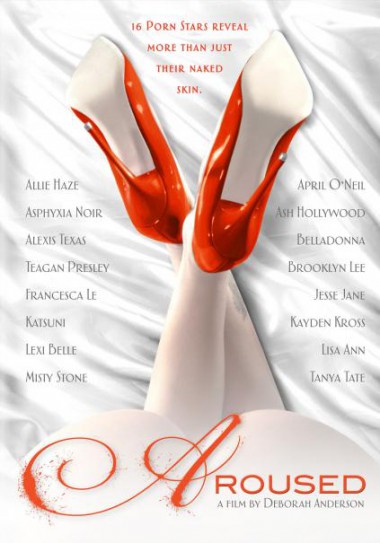 as an indistinguishable living sex doll in which the assortment of working orifices is of paramount commercial consideration. That this denial and limitation of the adult actress’ identity as anything but an object leading to masturbatory release would appear-   in any rational discussion  -to automatically lead to a sincere attempt at the humanization in its subject portraitures-  the sixteen adult film actresses chosen for Anderson’s photographic reinvention  -might also lead to some stark and important revelations concerning a number of questions which Anderson herself poses near the beginning of the film:  Why are porn stars looked down upon by the very society which uses their “debasement” for its own sexual pleasure, and-  perhaps even more importantly  -why and how has sex become (in media and culture-at-large) the ultimate power tool, determining both desirability and commercial worth? Naturally such questions ask more about the society outside the realm of the sex worker than directly of the pornographic ethic, but any substantive discussion of the subject must include an unflinching exploration of the hypocritical symbiotic relationship between public sex worker and the silent consumer class..

To read the complete review, click the following link to:  https://chandlerswainreviews.wordpress.com/documentaries/

I've been a puppet, a pirate, a pauper, a poet, a pawn and a king, not necessarily in that order. My first major movie memory was being at the drive-in at about 1 1/2 yrs. old seeing "Sayonara" so I suppose an interest in film was inevitable. (For those scoring at home- good for you- I wasn't driving that evening, so no need to alert authorities.)Writer, critic and confessed spoiler of women, as I have a tendency to forget to put them back in the refrigerator. My apologies.
View all posts by chandlerswainreviews →
This entry was posted in Documentaries, erotica, Film Reviews, movie reviews, Movies, photography, pornography, Reviews, Sex in Cinema, women and tagged Deborah Anderson, Fran Amidor, Gloria Leonard, Misty Stone. Bookmark the permalink.