Evenings at the Outer Circle

One of the most recognizable characteristics of the 1950’s science fiction film is that peculiar concession to the presentation of an academic nature profile in the midst of an atomic mutation’s using the nearest township as an appetizer; those brief factual film presentations educating the film’s hero as to the inevitably aggressiveness of Mother Nature (whose message always seems to be that everything would kill us if it were large 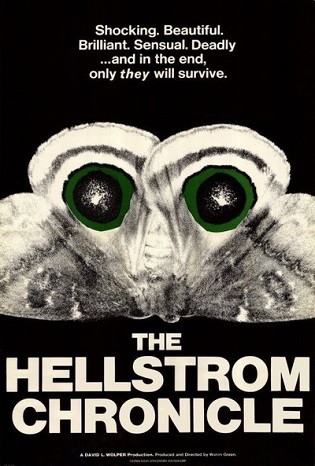 enough), as if  the National Geographic were suddenly in the business of tracking down and sounding alarums against those giant predatory beasties mysteriously resistant to pesticides and the square cube law.

In the curious 1971 documentary “The Hellstrom Chronicle” these very same occasions for academic zoological profiling are reprioritized and given center stage in the form of a feature length caveat by a severely distressed scientist Dr. Lasse Hellstrom, who, after a rather needlessly protracted period of sweaty palmed alarmist foreplay, presents evidence of his not particularly convincing assertion that the taken for granted balance of nature is doomed to continue with Man as the dominant species on the planet. The façade of the science fiction context is disrupted, but only momentarily, as the concept of enlarged predators is quickly supplanted with a similarly disheartening prediction concerning their mutation-free counterparts. Prof. Hellstrom declares that the insect world’s longevity and adaptability make it inevitable (presumably, this is a last call dinner bell announcement rather than mere existential theory) that those flying and crawling critters so casually assaulted by pesticides, shoe leather and no pest strips will dominate and destroy Mankind. It seems that in the melding of cinema and entomology, Darwin’s descendants of the ape cannot catch a break.

The dire nature of the film’s message is given little credence by Hellstrom’s counterculture worrywart attitude that swiftly, much like his subject insects, evolves and adapts to the circumstances to ensure survivability. In the case of his theorem, survival is measured in a gossamer-thin mask of credibility, to which Hellstrom quickly reverts to a pronounced and puzzling stratagem of sarcasm and prophetic flippancy. This is no 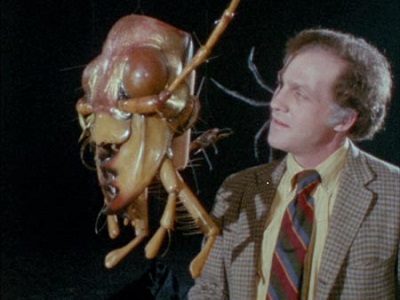 more evident than in the puzzling segment which follows the good doctor in a nocturnal prowl about a drive-in movie theater (it might be enlightening to consider the contents of a research scientist’s grant application if it describes this methodology) with a running commentary about the evolutionary superiority of the procreative mating habits of bugs versus those of the occupants behind the steamed windshields. Were the fate of humanity surrendered to such analogous analytical nonsense, no doubt the monitors of the world’s shipping lanes would still be working overtime to prevent vessels from sailing over the edge.

The comparative hokum is an unnecessary distraction from what is truly extraordinary in the film and that is the plentiful footage of insects at work, play, in flagrante and war, achieved through the ingenious use of microphotography, a stunningly otherworldly sound design, brisk and exciting editing and a effectively ominous score by Lalo Schifrin which conveys a frightening aural apocalypse; an insectoid battle cry which when combined with the stunning imagery might convince

the viewer of the possibility of Dr. Hellstrom’s general conjectures, if not his rigid prognosticative death sentence, if not for a last minute switch, in which the entire film (save the noneditorial particulars conveyed about the particulars about insect physiology and behavior patterns) is revealed to be a hoax: the loopy Dr. Hellstrom is a fictitious character played by actor Lawrence Pressman. The counterfeit nature of the movie explains much, including the jarring difference in the method by which the insect footage is presented (visually and aurally spectacular), whereas the bridging sequences are unsophisticated and technically shoddy (they are handled by two different directors), certainly emphasizing the disconnect between the material which can be assessed at face value and that which is meant as a not-so-grand cinematic parlor trick. (The final segment in the film, dealing with an invading horde of driver ants, is genuinely terrifying, almost giving credence Hellstrom’s claims, except that it comes mere moments before the peek-a-boo reveal.)

Just what did the filmmakers have in mind? With such a surplus of groundbreaking visual material, why not use it in a straightforward documentary presentation rather than being degraded by the increasingly annoying faux fringe science treatise to which it is wedded? Even if the intention were to meld the documentary form with science fiction, why intentionally undercut the value of what has been so expertly and laboriously assembled with a level of anti-intellectualism that only deflates the credibility of those portions of the film (supposedly validated by experts in the field) which impart enriching information? Surely there might have been a consideration, at some point, to apply dignity to a film offering an experience that would reveal to the viewer a world that had never been imagined before (and how often can the movies honestly lay a claim to that?), without the intrusion of demeaning Hollywood trickery?