Posted on February 19, 2021 by chandlerswainreviews 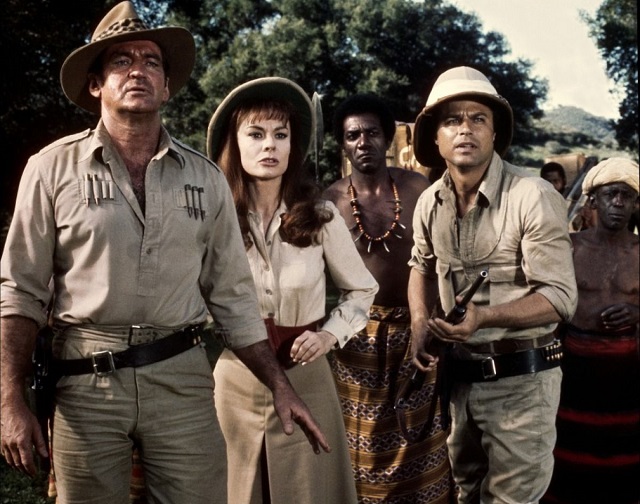 The painfully optimistic marketing material announces that this remake of the 1931 African adventure “Trader Horn” is in the grand tradition of “King Solomon’s Mines” and “Mogambo”. For once we are presented with an example of long-sought after honesty in Hollywood advertising, thoug

h one might be careful as for what one wishes. If this version  summons less a sensation of nostalgia than one of contrived revisitation, it is most assuredly due to the bulk of this “new” version being cobbled together with such an alarming quantity of previously used stock footage from those aforementioned films (among others), that it may be a legitimate cause for a thorough Treasury audit into the Aubrey-era accounting books at MGM.

“Trader Horn” is the type of sensationalized literary property to which the studios of the so-called Golden Age were particular drawn; especially with those properties promising exotic locales (even if cleverly faked in studio) brimming with intrigue. However, even the most slavishly decorous settings could not ignite a spark in such a colorless romantic pairing as the sullen Jean Sorel accompanied by an alarmingly antiseptic Anne Heywood with whom we are stranded on a meager journey through what appears to be the studio’s Culver City backlot. So crisply arranged are the newly lensed safari locations, one can practically see the lawnmower marks on the veldt.

To read the complete review, click the following link to:  https://chandlerswainreviews.wordpress.com/now-playing-at-the-mercado-cinema/

I've been a puppet, a pirate, a pauper, a poet, a pawn and a king, not necessarily in that order. My first major movie memory was being at the drive-in at about 1 1/2 yrs. old seeing "Sayonara" so I suppose an interest in film was inevitable. (For those scoring at home- good for you- I wasn't driving that evening, so no need to alert authorities.)Writer, critic and confessed spoiler of women, as I have a tendency to forget to put them back in the refrigerator. My apologies.
View all posts by chandlerswainreviews →
This entry was posted in Africa, biography, books, movie remakes, Movies, Rod Taylor, Romance, writing and tagged Anne Heywood, Rod Taylor, safari. Bookmark the permalink.