Days and Nights at the Chestnut Hill Cinemas

artistic instincts of the director-writer-actor is accredited with a boldness of vision in summoning yet another movie parody after the  phenomenal box-office success of ” Blazing Saddles” and “Young Frankenstein”. In Hollywood, nothing proffers an excuse to grant a rapid rise to the pantheon of industry adulation like a keen eye on past successes and the balance sheet.

Alcoholic has-been movie director Mel Funn (Mel Brooks) attempts to persuade the Big Studio Pictures’ Big Studio Chief (Sid Caesar) to produce his latest project: a silent movie. (The novelty of “Silent Movie” being that it is also  presented as a narrative told through intertitle cards.) Despite his initial hesitancy, the studio chief green lights the project, unleashing Funn and his sidekicks, Marty Eggs (Marty Feldman), Dom Bell (Dom DeLuise), on an unsuspecting Hollywood to attract big star talent to assure the project’s box-office success (a formula only Hollywood insiders irreversibly removed from reality would believe the popular audience is foolhardy enough to fall prey); all of whom enthusiastically agree to participate despite the cloddish behavior distinguishing Funn’s entreaties, and the fact that not one actor is given a clue as to the nature of the project. This prolonged casting of

actors is laborious and without any comedic payoff; an exercise in wilting expectations, especially when not one of the “stars” commands a demonstrable talent for the type of physical eloquence required of a silent movie performer. Consuming the bulk of the film’s running time, this needlessly extended star search is merely a strange form of incestuous industry valentine in which the antiquated Hollywood notions of blind public adulation of movie celebrity is enough justification to excuse a series of blatant extended cameos in which the featured actors (Burt Reynolds, James 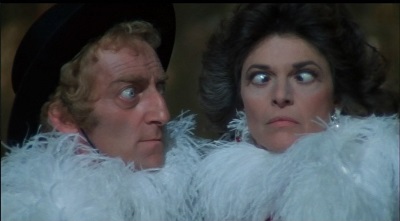 Caan, Paul Newman, Liza Minnelli, Anne Bancroft) play themselves and are meant to be admired, not for any accomplishment within the context of the film, but simply for being movie stars. (Within this field of undistinguished egos on parade, the only two who leave even the sparest impression are Marcel Marceau’s rather miserly demonstration of his most fundamental of mime skills and Anne Bancroft’s bizarre resuscitation of the spare comic qualities of Ben Turpin; a shallow offering failing to obscure the strictly nepotistic nature of her employment.)

From the start, it is evident that Funn’s two comrades are entirely superfluous to the plot, nor does the introduction of corporate sharks Engulf (Harold Gould) and Devour (Ron Carey) prove to provide a sufficient catalyst to bring noticeable complications to the virtually nonexistent plot beyond engineering a weak late hour romance between Funn and chanteuse provocateur Vilma Kaplan, who is advertised as an irresistible seductress in

the classic femme fatale tradition, but who comes across as a model of Kewpie Doll overreach as portrayed by the miscast Bernadette Peters. (This entire subplot seems inserted mainly to grant Brooks the opportunity to show off his skills at playing a drunk, which are, to be charitable, invisible.) However, for a vivid demonstration of the true lethargy of Brooks’ comic inspiration, one need look no further than the fact that we never see a single frame of the silent film around which the entire story orbits. Nor does Brooks attempt any mimicry of a visual aesthetic (as was admirably recaptured in “Young Frankenstein”) commensurate with the silent film; instead shooting much of the action as if it were occurring on a variety stage; with an unexpected consistency of both badly blocked action 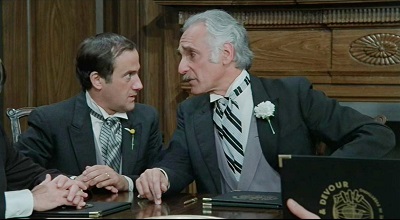 and indifferent framing. As a result, what the film does successfully convey is a self-defeating enervation; with Brooks’ sloppy visual aesthetic (Paul Lohmann’s unnuanced cinematography boasts the lighting subtlety of a 1970’s TV game show) hampering the building of any enlivening comic rhythm which might be mined from his script, no matter how creatively impoverished. Brooks fails to invest the film with parodistic reference points either specific or general to the silent cinema but finds a comfortable substitution for informed representation in a shameless predilection for undercranking his camera.

Two additional areas of negative achievement are also worth a passing scrutiny. First, despite the crediting of four different screenwriters, the intertitles throughout “Silent Movie” are symptomatic of the primitivism of scripting; reflecting a level of crudity that never elevates above a flagrant intellectual condescension to the audience. Rather than the articulately composed intertitle cards of the authentic silent era (evidence which belies the notion that even the earliest films were aimed at a barely literate lower class rather than a

popular audience nourished by the stimulative effects of the highest expressions of language), the intertitles in “Silent Movie” are aimed squarely at preschoolers.  Equally pronounced in its abrasive absence of subtlety and accentuating Brooks’ dishonest inability to capture a single moment reflective of the balletic comic grace nurtured and evolving throughout the silent era, is his astonishingly lazy reliance on the musical score of his regular composer John Morris to shamelessly supply every comedic gesture with a musical punctuation; an unrelenting cacophonous sledgehammering of clangs, rim shots, blurts, whistles and crashes so intrusive as to virtually render the film’s claim as a silent movie fraudulent as Morris’ contribution emerges as merely an aberrative clutter of sound that would make the heartiest viewer beg for silence. (For a demonstrable example of how a composer may contribute to a film’s humor to the point of the score literally becoming a character in the film-  yet without aural offense  -one need only refer to Ernest Gold’s dizzy work for “It’s a Mad, Mad, Mad, Mad World”.)