Posted on December 31, 2020 by chandlerswainreviews

One of the immediate presumptions one can make when noting the presence of genre regular Russell Johnson in Roger Corman’s “Attack of the Crab Monsters” is that, as in

most of his other unlucky SF appearances, he will not survive to the closing credits.

It’s this type of predictability which plagues the 1950s atomic age monster film, so numerous yet comfortable in adhering to a rather narrow checklist of formula tropes. Compound the tiresome familiarity with the glaring shortcuts inherent in no-budget filmmaking and the audience is at the mercy any cleverness which may be scraped together by necessity through the desperation created by the film’s independent creators lack of resources readily available to even the most shameless story deficient major studio potboiler which may shamelessly disguise storytelling deficiencies through a preponderance of cosmetic distractions with an increased focus on production values, star power, gaudy color photography or overly ripe symphonic scoring.

In the case of “Attack of the Crab Monsters”, the attractions are limited to a worrisome pair of gigantic papier mâché crustaceans complete with trash bag eyelids over their roughly painted peepers. Unfortunately, with the exception of the aforementioned short-lived Russell, the cast is no more interesting than the rocks which endlessly cascade about their heads, nor is what they are compelled to say in the uncharacteristically bland dialogue provided 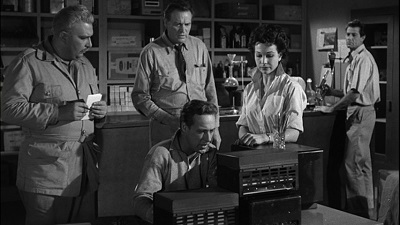 by Charles B. Griffith. However, despite the virtual absence of characters whose survival would generate more audience interest than finding a comfortable theater armrest, the film is corpulent with a literal smorgasbord of screwball conceptions which when shamelessly cemented together result in an uncomfortable quilting of irrationally explained story elements requiring a constant running commentative road map of arcane scientific gibberish which passes for conversation but merely (and vainly) attempts to explain to the audience just what the hell is going on. It’s the kind of film where a scientist profoundly announces his discovery of an anomaly of atomic structure while using only a hobby shop microscope.

To read the complete review, click the following link to: https://chandlerswainreviews.wordpress.com/poverty-row/

I've been a puppet, a pirate, a pauper, a poet, a pawn and a king, not necessarily in that order. My first major movie memory was being at the drive-in at about 1 1/2 yrs. old seeing "Sayonara" so I suppose an interest in film was inevitable. (For those scoring at home- good for you- I wasn't driving that evening, so no need to alert authorities.)Writer, critic and confessed spoiler of women, as I have a tendency to forget to put them back in the refrigerator. My apologies.
View all posts by chandlerswainreviews →
This entry was posted in Drive-In Movies, horror, Movies, Roger Corman, science fiction, writing and tagged atomic mutations, Roger Corman, Russell Johnson. Bookmark the permalink.