Posted on April 11, 2015 by chandlerswainreviews 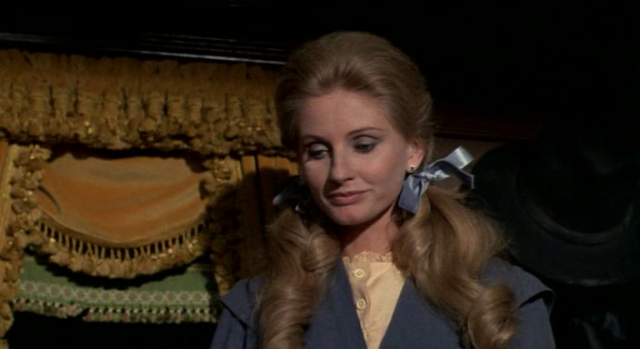 This aberration in the Alistair MacLean canon moves the author’s signatory plot twists, secret identities and hidden motives to the Old West in “Breakheart Pass”, a film plagued with the very fact that it does feature what is, by this time, a very discernible and overly familiar formula whose narrative “surprises” are more easily calculable to anyone who has seen more than a few of his previous books find screen life. When a train traveling to remote Fort Humboldt, armed with medicine to combat an outbreak of diphtheria, encounters a series of unexplained killings-  including the mass death of two carloads full of soldiers  -it is left to the mental acumen of captured arsonist and murderer John Deakin (Charles Bronson) to unravel just what is transpiring; all the while accompanied by less concerned fellow travelers including the Governor (Richard Crenna), an Army major (Ed Lauter) and a sheriff (Ben Johnson)! Per usual in a film version of a MacLean novel, the good guys are easily identifiable (no matter how decorous the masquerade) by the prominence of billing, thus Deakin will be assured a placement on the side of the angels as his name rises above the title.

To read the complete review, click the following link to: https://chandlerswainreviews.wordpress.com/chandlers-trailers-short-bits-for-emerging-cinephiles-and-a-better-america/

I've been a puppet, a pirate, a pauper, a poet, a pawn and a king, not necessarily in that order. My first major movie memory was being at the drive-in at about 1 1/2 yrs. old seeing "Sayonara" so I suppose an interest in film was inevitable. (For those scoring at home- good for you- I wasn't driving that evening, so no need to alert authorities.)Writer, critic and confessed spoiler of women, as I have a tendency to forget to put them back in the refrigerator. My apologies.
View all posts by chandlerswainreviews →
This entry was posted in Alistair MacLean, books, Charles Bronson, Film, Film Reviews, movie reviews, Movies, Mystery, Reviews, westerns, writing and tagged Jill Ireland, Tom Gries. Bookmark the permalink.