Posted on September 28, 2014 by chandlerswainreviews 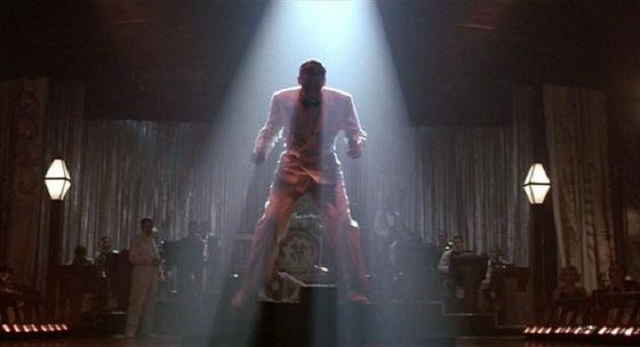 It’s a gangster epic, it’s a musical: it’s two failures in one. Francis Coppola’s “The Cotton Club” is another example of Hollywood’s continued tradition of minimizing the history and legacy of black culture in America and the exclusion of this culture as anything but a colorful backdrop to the more, by extension of traditional thinking, interesting concerns of white characters, even if they happen to be fictional creations.  The film’s central setting is the eponymous Harlem nightclub which featured some of the most important musical talent of America’s black community while owned and patronized by whites, though there is no attempt to tell the story of the club nor of the evolution of music which occurred on its stage as the film veers into a mixture of white gangsterism and badly conceived stock characters, none of which would merit interest specific to the landmark club nor its roster of legendary performers. failing to explain its significance nor as to illustrate the emergence of the Black talent which featured prominently. Instead what we get is a silly melodrama, the kind of which in the past would have been pumped out with assembly line fervor at either the majors B-picture divisions, or in abundant number by Poverty Row studios whose product often flowed with a surprising energy to compensate for the lack of richer production values, which is, or should be, right up a resourceful director’s comfort zone. Instead, the increasingly ponderous filmmaker, working with inflationary bloat, delivers a lazy and insulting exercise in cheap crime melodrama usurping a rare opportunity for a significant view of extraordinary black talent; both of the past and the present.

To read the complete review, click the following link to:  https://chandlerswainreviews.wordpress.com/nights-at-the-sack-cinemas/

I've been a puppet, a pirate, a pauper, a poet, a pawn and a king, not necessarily in that order. My first major movie memory was being at the drive-in at about 1 1/2 yrs. old seeing "Sayonara" so I suppose an interest in film was inevitable. (For those scoring at home- good for you- I wasn't driving that evening, so no need to alert authorities.)Writer, critic and confessed spoiler of women, as I have a tendency to forget to put them back in the refrigerator. My apologies.
View all posts by chandlerswainreviews →
This entry was posted in crime, dance, Film Reviews, Francis Ford Coppola, History, movie reviews, Movies, music, Reviews and tagged black culture, gangsters, Gregory Hines. Bookmark the permalink.