Posted on January 4, 2015 by chandlerswainreviews 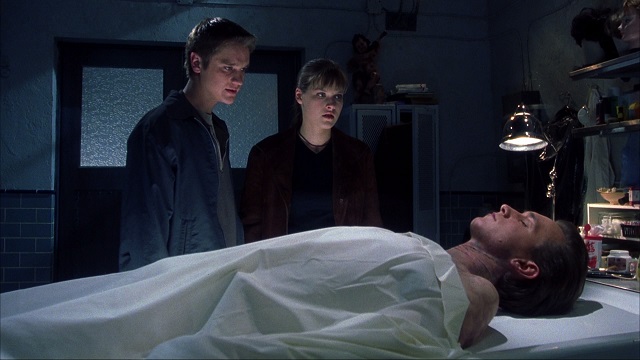 An ersatz slasher film in which the usual faceless and unstoppable knife wielder is replaced by a sadistically merciless Grim Reaper with a predilection toward Rube Goldberg-like execution schematics, “Final Destination” presents a situation wherein a high school group (mercifully bereft of the usual shallowly brainless horndogs, these characters are happily ordinary and thus subject to far more comfortable sympathies) miss a field trip flight to France- due to circumstances involving a panicked reaction to precognitive visions  -which almost immediately explodes during takeoff; the premise which constitutes the rest of the film presumes that Death is not one to be lightly cheated, and so pursues the unlucky survivors with a dedication to unnaturally complicated deaths which often verge on the ludicrously ridiculous.

I've been a puppet, a pirate, a pauper, a poet, a pawn and a king, not necessarily in that order. My first major movie memory was being at the drive-in at about 1 1/2 yrs. old seeing "Sayonara" so I suppose an interest in film was inevitable. (For those scoring at home- good for you- I wasn't driving that evening, so no need to alert authorities.)Writer, critic and confessed spoiler of women, as I have a tendency to forget to put them back in the refrigerator. My apologies.
View all posts by chandlerswainreviews →
This entry was posted in Film, Film Reviews, horror, movie reviews, Movies, Reviews. Bookmark the permalink.