Posted on January 26, 2015 by chandlerswainreviews

The second of his two western efforts, Richard Brooks’ “Bite the Bullet” demonstrates the value of an ambitious director operating without a particularly innovative visual sense but a finely honed sense of what’s important in a story (think Norman Jewison). With the exception of a few intrusively gimmicky moments (involving the use of double exposure and slow motion), Brooks’ film is a peon to traditional western sensibilities and a gentle nod in recognition to their eventual fading in the march of history. Despite the action 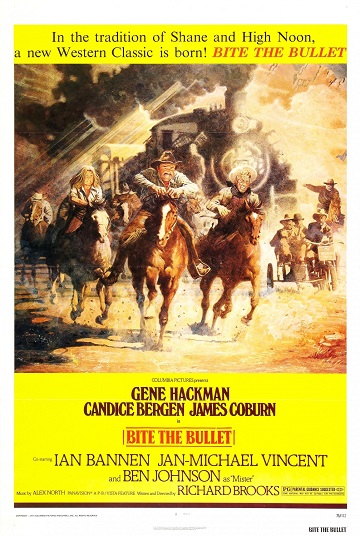 basis of the narrative and the plentiful occasions for violence, it remains a quieter western adventure- often quite meditative  -than the more cynically graphic revisionist westerns which often conceded an unnecessarily harsh proclivities toward hostility as a sign of character rather than advancing the idea of a broader range of rough hewn but positive behavioral traits defining the frontier persona. Not unlike “The Professionals”, “Bite the Bullet” eloquently extends the demonstration of character equally between illustrative actions and particularly evocative dialogue; a comfortable duality with which the director-writer skillfully reveals the often surprisingly contrary, yet always logical, construction of his characters. Though a narrative driven by a particularly specific event-  the running of a 700 mile contest of endurance on horseback, “Bite the Bullet” is ultimately a story enriched and given fulfillment through the  of its roster of competitors, ably supported by an equally interesting and interested sideline spectators to the competition: it’s an engaging ensemble piece, though its spirited tone of purely American reckless adventure is certainly born from one person in particular, who has neither an active nor supporting role per se, yet whose continuous referencing nonetheless invests the entire story with a bracing spirit of optimistic destiny: President Theodore Roosevelt, whose recurring referencing can be handily seen as a bridging device between the representations of the disappearance of the untamed West (in actuality if not the Western ideal) and encroaching modernity. (Among other indicators of the West regarded as rich pickings for East Coast business interests is a glib comment made by a smugly wealthy business tycoon-  nicely played by Dabney Coleman  -who flatly states “we don’t have to know about it [the West], we own it.”)

To read the complete review, click the following link to:  https://chandlerswainreviews.wordpress.com/nights-at-the-silver-theater/

I've been a puppet, a pirate, a pauper, a poet, a pawn and a king, not necessarily in that order. My first major movie memory was being at the drive-in at about 1 1/2 yrs. old seeing "Sayonara" so I suppose an interest in film was inevitable. (For those scoring at home- good for you- I wasn't driving that evening, so no need to alert authorities.)Writer, critic and confessed spoiler of women, as I have a tendency to forget to put them back in the refrigerator. My apologies.
View all posts by chandlerswainreviews →
This entry was posted in acting, Candice Bergen, Film Reviews, gene hackman, History, movie reviews, Movies, Reviews, westerns, writing and tagged Ben Johnson, James Coburn, prostitutes, Richard Brooks, Teddy Roosevelt. Bookmark the permalink.