Posted on June 6, 2021 by chandlerswainreviews 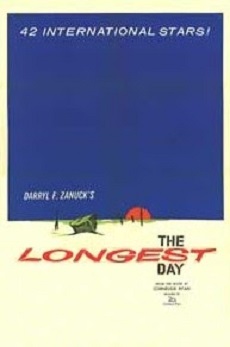 of World War 2 has the disadvantage of not only following dozens of characters over dozens of different locations, but also the input of three different credited directors working to patch a cohesive picture of just what did go on during the massive invasion of Normandy on that “longest day” (as referred to in a quote by German Field Marshal Irwin Rommel) on June 6, 1944.  Add to that, the fact that, unique in a big-budget studio epic, disregarding the expectations of the audience, the story is presented entirely in correct linguistic terms: the French and Germans speak in their native tongues with the assistance of subtitles. By all rights, this should be a colossal boondoggle, a confused and incoherent film not unlike

I've been a puppet, a pirate, a pauper, a poet, a pawn and a king, not necessarily in that order. My first major movie memory was being at the drive-in at about 1 1/2 yrs. old seeing "Sayonara" so I suppose an interest in film was inevitable. (For those scoring at home- good for you- I wasn't driving that evening, so no need to alert authorities.)Writer, critic and confessed spoiler of women, as I have a tendency to forget to put them back in the refrigerator. My apologies.
View all posts by chandlerswainreviews →
This entry was posted in Movies. Bookmark the permalink.