Posted on February 3, 2019 by chandlerswainreviews

Hollywood seems reluctant to ignore a good story about mental illness as the actors are given to unleashing the hounds in roles that are traditional award magnets, while directors are afforded the opportunity to extend their visual vocabulary to heightened 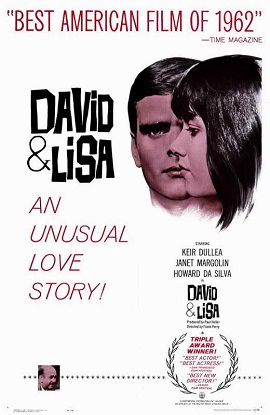 aesthetic exaggerations depicting the (usually) frenzied mental state of the character (the Salvador Dali designed funhouse ride dreams of “Spellbound”) or the nightmarish condition of their institutional environs (the Bosch/Busby Berkeley flavored tableaux of “The Snake Pit”).

With “David and Lisa”, Frank Perry, in his directorial debut, initially sheds the self-consciously stylized baggage most filmmakers indulge in with similar material, favoring an impressively unobtrusive, pseudo-documentary style in which there is a genuine respect for the process of quiet observation and listening as a means to achieve real understanding, and secure emotional intimacy.

David Clemens (Keir Dullea) is a highly intelligent young man who suffers from a pathological terror of physical contact. As he is introduced, he is being placed as a resident of a psychiatric youth treatment facility, though there is never an attempt to specifically identify his or any of the other residents’ actual psychological disorders; which by all available evidence, seems to involve different forms of discomfort with normal social interaction (though the same could be said of any high school cafeteria, so

the lack of more clinical reference points is not helpful in appreciating the film’s set-up). David is arrogantly antisocial, dismissing the thoughts and interest of others as insignificant, but is obsessed with the mechanics of timepieces and suffers from obvious obsessive compulsive behavior. His emotional isolation finds relief when he falls into an empathetic relationship with fellow resident Lisa Brandt (Janet Margolin), an energetic adolescent girl who apparently can only speak through childish rhyming verse, but who also suffers sudden shifts into a more withdrawn and mute personality (communicating solely through writing), identifying herself as Muriel. Lisa’s suffering from schizophrenia (as it is identified by David during one of his early smarty-pants pronouncements) suggests that the center’s patient roster acknowledges the presence of patients suffering from acute biological not restricted to simple behavioral disorders but also acute biological disorders.

To read the complete review, click the following link to:  https://chandlerswainreviews.wordpress.com/evenings-at-the-afi/

I've been a puppet, a pirate, a pauper, a poet, a pawn and a king, not necessarily in that order. My first major movie memory was being at the drive-in at about 1 1/2 yrs. old seeing "Sayonara" so I suppose an interest in film was inevitable. (For those scoring at home- good for you- I wasn't driving that evening, so no need to alert authorities.)Writer, critic and confessed spoiler of women, as I have a tendency to forget to put them back in the refrigerator. My apologies.
View all posts by chandlerswainreviews →
This entry was posted in books, children, education, Movies, parenting, psychiatry, Romance, writing and tagged Frank Perry, Howard Da Silva, Janet Margolin, Keir Dullea. Bookmark the permalink.