Posted on October 4, 2015 by chandlerswainreviews 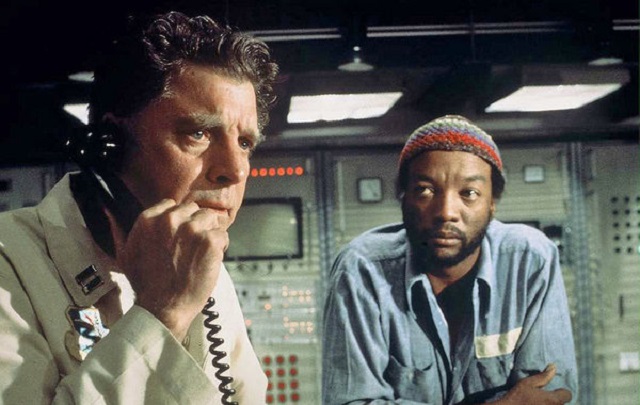 “Twilight’s Last Gleaming”  (1977) Starring Burt Lancaster, Richard Widmark, Paul Winfield, Charles Durning, Burt Young, Gerald S. O’Laughlin, Melvyn Douglas, Joseph Cotten, Richard Jaeckel, William Marshall. Screenplay by Ronald M. Cohen & Edward Huebsch, based on the novel ‘Viper Three’ by Walter Wager. Directed by Robert Aldrich. Faithfulness is not always an admirable trait. When a film’s fidelity to its source material is inclusive of the more problematic characteristics of the original novel, one may question as to whether such an adaptive misjudgment is a creative inability in the filmmakers to either recognize those deficiencies or simply a failure to reconcile the material into a more workable alteration; which would beg the question as to the attraction of the material in the first place. In Robert Aldrich’s “Twilight’s Last Gleaming”, the problems manifest in Walter Wager’s novel Viper Three are readily apparent despite a drastically altered motivational direction invested in the narrative which changes the reasons for the film’s actions if not the credibility of the characters. Disgraced General Lawrence Dell (Burt Lancaster) and a handful of confederates (played by Paul Winfield in full street hipster mode and Burt Young inappropriately inserted to contribute his usual ethnic half-wit act that results in obliterating any trace of suspense in favor of low humor) manages to take over an ICBM  complex with the ease of sneaking into a second feature at a mulitiplex. This lack of complication in muscling in on the launch control of nine intercontinental missiles is consistent with Aldrich’s uncharacteristically lackadaisical approach to the material, missing his signature muscular sense of masculine brutality while failing at committed exploration of the story’s newly found thematic concerns; which is ironically fortunate as close scrutiny would quickly reveal the thinness of the thematic reconception.

To read the complete review, click the following link to:  http://chandlerswainreviews,wordpress.com/the-concession-stand-quick-snack-reviews/

I've been a puppet, a pirate, a pauper, a poet, a pawn and a king, not necessarily in that order. My first major movie memory was being at the drive-in at about 1 1/2 yrs. old seeing "Sayonara" so I suppose an interest in film was inevitable. (For those scoring at home- good for you- I wasn't driving that evening, so no need to alert authorities.)Writer, critic and confessed spoiler of women, as I have a tendency to forget to put them back in the refrigerator. My apologies.
View all posts by chandlerswainreviews →
This entry was posted in books, Burt Lancaster, Cold War, crime, Film, Film Reviews, movie reviews, Movies, politics, Reviews, Richard Widmark, Vietnam, writing and tagged Robert Aldrich. Bookmark the permalink.