Posted on May 8, 2015 by chandlerswainreviews

In “Pale Rider”, director Clint Eastwood has fashioned not so much a remake of “Shane” as a reinterpretation of the story’s key elements mixed with a retooling of the basic supernal retributive conventions of his own 1973 “High Plains Drifter”; an amalgam of styles both aesthetic and thematic that while not an entirely successful mesh, does often 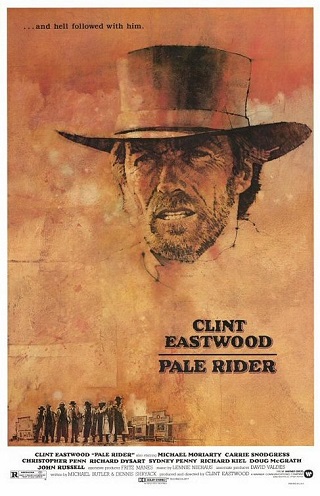 yield interesting results in the continuation of Eastwood’s personal directorial style; an aesthetic which stresses the spare leanness of storytelling (virtually commiserate with docudrama in its lack of trimmable narrative fat) that is highly reminiscent of his mentor Don Siegel, as opposed to the overtly flamboyant and self-consciously stylized visual histrionics of his other more invisible influence, Sergio Leone; though such storytelling austerity places greater demands on the written material to be complimentary in its lack of sagacity by making every word and gesture carry a contributory value of significance: a trait of certain films which is often mistaken as profundity when, in fact, it might be more practically suggestive of a formal emptiness.

This emptiness actually factors into the true Leone influence as once again, Eastwood’s character is portrayed as a type of nomadic cipher, though in actuality rather than The Man With No Name, is more accurately The Man With No Story: we know no more about him by the end of the film than we do at the beginning, despite the fact that there are myriad opportunities for intimate exploration that are met with frustratingly stony silence. That the true nature of his character remains undefined (not to mention possibly phantasmagorical) is a result of 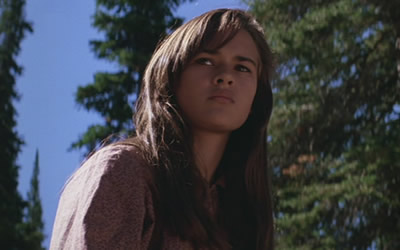 deliberative design, and thus one must ascribe as a calculated pattern in the Eastwood directorial oeuvre. The characters played by Eastwood remain existential ciphers; rather than originating as provocateurs, they seem limited to entering an already embittered arena requiring a moral cleansing by way of a six-shooter; Eastwood plays the avenging angel in Western garb obliterating the frontier Sodom and Gommorah. The religious overtones (rather than purely supernatural echoes which invested “High Plains Drifter” with a sense of Hellbound retribution but without a sophisticated enough development to suggest whether or not that “avenger” was intended as supernal or merely supernatural) of the story are developed commensurately with the film’s swing toward a feminine (not feminist) perspective: something completely new in an Eastwood Western, though it is interesting to note that even this gentler presence is substantially limited to Sarah (Carrie Snodgress) and her young daughter Megan (Sydney

Penny), whose early whispered plea for help seems to initiate the appearance of the mysterious Preacher (Eastwood). There is a dual romantic dynamic at play with both Sarah and daughter expressing romantic longings for the enigmatic stranger-  suggested by his unflinching willingness to confront menacing antagonists  -despite the fact that Sarah is also involved in a tentative relationship with Hull Barret (sensitively played by Michael Moriarty), a propector who rather bravely takes on a role of  reasoned leadership among the settlers and becomes an ersatz sidekick and ally to Preacher. However, with the film’s elemental Biblical charged stand of Good vs. Evil, Eastwood boxes himself into a creative paradox: what works to inform the film with this limiting moral primitivism is also what causes the film to fall short of a fully realized vision.

To read the complete review, click the following link to:  https://chandlerswainreviews.wordpress.com/views-from-the-screening-room/

I've been a puppet, a pirate, a pauper, a poet, a pawn and a king, not necessarily in that order. My first major movie memory was being at the drive-in at about 1 1/2 yrs. old seeing "Sayonara" so I suppose an interest in film was inevitable. (For those scoring at home- good for you- I wasn't driving that evening, so no need to alert authorities.)Writer, critic and confessed spoiler of women, as I have a tendency to forget to put them back in the refrigerator. My apologies.
View all posts by chandlerswainreviews →
This entry was posted in clint eastwood, Film, Film Reviews, movie reviews, Movies, religion, Reviews, westerns, women, writing and tagged Doug McGrath, John Russell, Richard Kiel. Bookmark the permalink.