Posted on October 27, 2018 by chandlerswainreviews 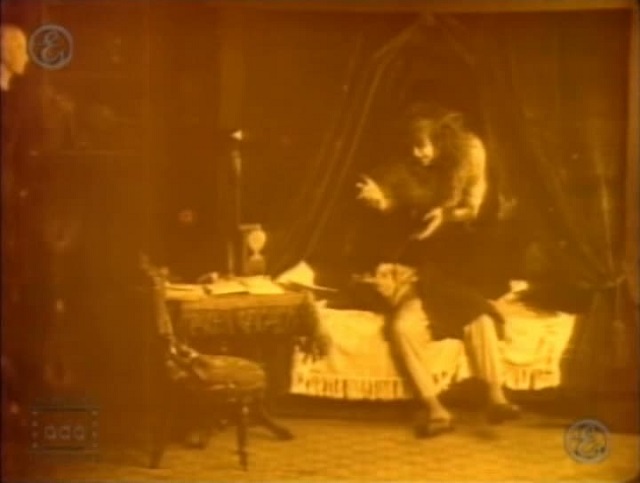 In an image starkly reminiscent of Henry Fuseli’s painting The Nightmare, a prostrate Frankenstein is haunted by his creation in J. Searle Dawley’s 1910 film version of Mary Shelley’s “Frankenstein”.

Though appreciably compromised in its filmic translation from the novel by Mary Wollstonecraft Shelley (an introductory title acknowledges the film to be a “liberal adaptation”), not only due to a restrictive running time, but also in resulting necessary pruning of the source-  not due to parochial considerations of

potentially sensational material, but due to the thematic breadth of the book, J. Searle Dawley’s 1910 film of “Frankenstein” is an impressively conceived film which, although simplifying the events of the source material, manages to achieve a valiant swing and miss at the thematic heart of the novel; appreciably more than most of the more popular incarnations to follow, as their genesis was fatefully altered by the intermediate intrusion of a 1927 theatrical revision authored by Peggy Webling, additionally seasoned with a liberal  adaptation by John L. Balderston before traveling through a gauntlet of, at least, four additional scenarists, which become the altered Hollywoodized template for most of the Gothically suffused productions to follow.

The film opens with Frankenstein departing for college and immediately jumps two years ahead when it is announced that he has “discovered the mystery of life”, though no details are shed concerning the nature of this discovery, which is actually in keeping with Shelley’s story, in which Frankenstein’s methodology (outside of the use of used body tissues) was entertained with a similar obscurity; with the novel concerned more with the philosophical underpinnings of

such a discovery rather than the nature of its mechanics. However, in dramatizing the creature’s creation, Dawley’s film does suggest tantalizing links to the mythic rather than the scientific; with the monster sculpted in a fiery vat, suggesting an elemental association with the Greek myth of the Titan Prometheus to whom Shelley shares a similar insight into the secrets of life and death and similarly uses that knowledge incautiously, both failing to reconcile responsible action with the acquisition of advanced (read, forbidden) knowledge. Shelley explicitly addresses this very parallel in her thematic attribution when she subtitled her novel: The Modern Prometheus.

I've been a puppet, a pirate, a pauper, a poet, a pawn and a king, not necessarily in that order. My first major movie memory was being at the drive-in at about 1 1/2 yrs. old seeing "Sayonara" so I suppose an interest in film was inevitable. (For those scoring at home- good for you- I wasn't driving that evening, so no need to alert authorities.)Writer, critic and confessed spoiler of women, as I have a tendency to forget to put them back in the refrigerator. My apologies.
View all posts by chandlerswainreviews →
This entry was posted in books, fRANKENSTEIN, horror, movie reviews, Movies, Reviews, science, silent films, silent movies, theater, writing and tagged Frankenstein, J. Searle Dawley, Mary Wollstonecraft Shelley. Bookmark the permalink.