Posted on October 31, 2018 by chandlerswainreviews

NO EXIT: If the prison bars are visually symbolic, they are quite thematically literal in Doris Wishman’s “Bad Girls Go to Hell”, which presents an inescapable elliptical nightmarish existence to which all women, whether “bad” or not. are destined to suffer. Rather than a misogynistic exercise, it is a bleakly existential portrayal of womanhood unable to find, or be allowed to find, any safe haven in a world filled with men and other women.

Crossing the perilous chasm that separates the blasé nudie and the realm of the deliberately provocative roughie, director Doris Wishman appears to delve into the distasteful world of misogyny with “Bad Girls Go to Hell”, yet within the loose framework 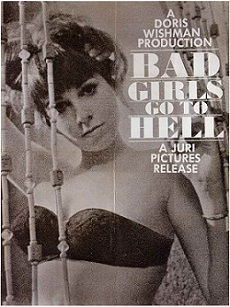 of her seedy narrative emerges an interesting variation of the time-honored knee jerk reactions to shallowly explored sexism whenever the subject of either the objectification or abuse (physical or sexual) of women is explored in the cinema.

Ellen (Gigi Darlene) is a young Boston housewife who enjoys the fruits of an existence of traditional but unremarkable domesticity- by all accounts, her husband Ted (Alan Feinstein) is loving and devoted -until she is raped one morning by the building janitor (Harold Key), who threatens to tell her husband what has happened. (Wouldn’t this amount to a criminal confession?) Returning to her apartment, Ellen finds a note under the door from the janitor, demanding that she comes to his room, which she foolishly does, hoping to bribe him from raping her again, which he wouldn’t be able to do if she had (a) called the police, (b) called her husband, or (c) not voluntarily walked into his room. However, during the second rape, she manages to smash her assailant on the skull, killing him instantly. Ellen, 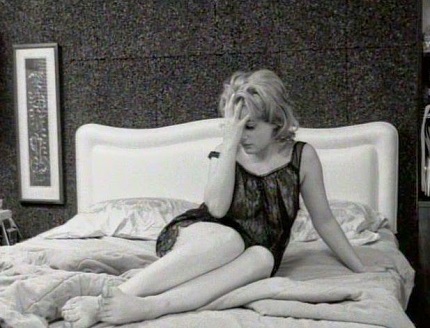 accompanied by panicked voiceovers and the sometimes overwrought stock jazz selections which Wishman leans heavily upon to carry the film through its more dramatically inert moments (as a writer and director Wishman seems more concerned with getting to a point in the narrative rather than in dramatizing it), she packs her bags and flees to New York City to “disappear in the crowd”, where she is summarily beaten, seduced and raped in her desperate attempt to find sanctuary. Eventually she finds a safe haven with a position as a live-in companion to an elderly invalid, however, but soon, through a startling coincidence that could only happen in the movies, her worst fears are realized. Or are they? Wishman provides one of those twists would have seem to allow the prolonged agony of a woman’s suffering without lasting emotional resonance or genuine consequences. Or does she? With its elliptical plot structure that bluntly projects (or sadistically enjoys, depending on how seriously one takes the film) a more despairing view of pessimism toward the human condition which extends far beyond a singular gender devaluation; unflinchingly portraying a spiraling descent into an existence of unceasing psychological and physical cruelty which, according to the film, innocent women are powerless to escape.

To read the complete review, click the following link to:  https://chandlerswainreviews.wordpress.com/sexual-politics-in-the-cinema/

I've been a puppet, a pirate, a pauper, a poet, a pawn and a king, not necessarily in that order. My first major movie memory was being at the drive-in at about 1 1/2 yrs. old seeing "Sayonara" so I suppose an interest in film was inevitable. (For those scoring at home- good for you- I wasn't driving that evening, so no need to alert authorities.)Writer, critic and confessed spoiler of women, as I have a tendency to forget to put them back in the refrigerator. My apologies.
View all posts by chandlerswainreviews →
This entry was posted in Boston, erotica, grindhouse, movie reviews, Movies, sex, women, writing and tagged Doris Wishman, Gigi Darlene, sexploitation, sexual abuse. Bookmark the permalink.