Posted on August 18, 2018 by chandlerswainreviews

repudiation of differences in the behavioral psychology between the classes-  as all are evaluated as equally corrupt, hypocritical and venal regardless of social ranking  –Buñuel has made the curious determination to strip the novel of its thematic essence and reduce the material to that of a weakly ironic and supremely unsatisfying melodrama.

Célestine is an attractive and inexplicably stylish woman who arrives by train from Paris to assume the role of chambermaid for The Priory, a country villa occupied by M. Rabour (Jean Ozenne) a shoe fetishist, his frigid daughter Mme. Monteil (Françoise Lugagne), whose a penchant toward the miserly substitutes for her lack of emotional intimacy, and her husband M. Monteil (Michel Piccoli), who compensates for a barren marital bed by impregnating a succession of the female domestics. Also present in the household are a number of other servants, including the brutish fascistic Joseph (Georges Géret) and the simple cook Marianne (Muni). Célestine, after some initial petty 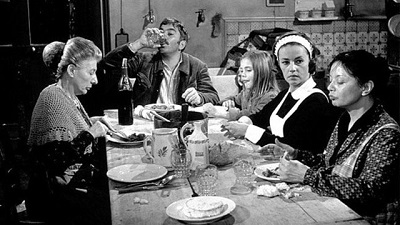 annoyances from her mistress, finds that through her attractiveness, subtle guile and sophistication, she is able to sufficiently influence those about her (with the exception of Joseph), to exert a comfortable measure of control over her circumstances. However, with the sudden brutal rape and murder of Claire (Dominique Sauvage), a young local girl to whom Célestine had developed a protective maternal attachment, her skill to emotionally manipulate is put to the test, when Joseph declares his love for her at the same time Célestine grows certain that he is the sought-after killer.

To read the complete review. click the following link to:  chandlerswainreviews.wordpress.com/cinema-francais/

I've been a puppet, a pirate, a pauper, a poet, a pawn and a king, not necessarily in that order. My first major movie memory was being at the drive-in at about 1 1/2 yrs. old seeing "Sayonara" so I suppose an interest in film was inevitable. (For those scoring at home- good for you- I wasn't driving that evening, so no need to alert authorities.)Writer, critic and confessed spoiler of women, as I have a tendency to forget to put them back in the refrigerator. My apologies.
View all posts by chandlerswainreviews →
This entry was posted in art house cinema, books, French cinema, Jeanne Moreau, Luis Bunuel, movie remakes, Movies, women, writing and tagged Jeanne Moreau, Luis Bunuel, Octave Mirbeau. Bookmark the permalink.