She Who Obeys: “Frankenstein Created Woman” (1967)

Posted on February 22, 2018 by chandlerswainreviews 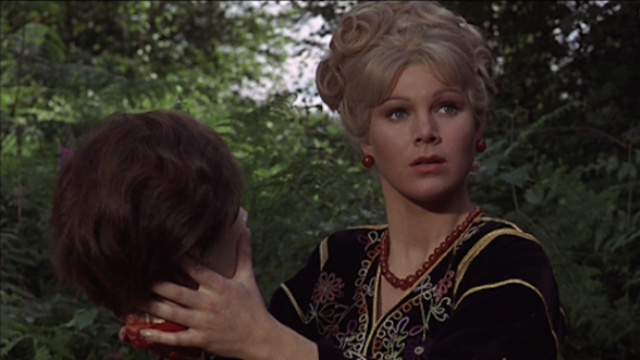 WHEN WILL WOMEN EVER GET AHEAD IN THE MOVIES?: Despite proving herself a prolific mankiller in Terence Fisher’s “Frankenstein Created Woman”, Susan Denberg is still subject to the whims of a male master’s voice, as is traditional in Hammer’s Gothic horrors. 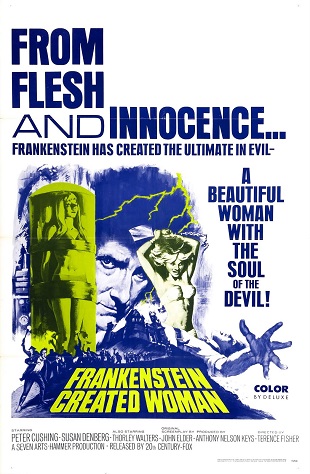 roles calling for little more than subservient heaving women in peril or subservient bodacious honeys present only for a titillating display of cleavage and curves  -it should come as no surprise that when that meager pedigree receives a bump in antagonistic prominence, such an elevation would continue to be sublimated by the will of all of the men in the room.

Terence Fisher’s “Frankenstein Created Woman” continues the apparently ceaseless experimentation of everyone’s favorite mad scientist who never seems to acknowledge the irony that his attempts to revive the dead usually end up with a greater quantity of deceased. Seeming to recognize the repetition of their Frankenstein films, screenwriter John Elder (the nom de plume for Hammer producer Anthony Hinds) alters Baron Frankenstein’s modus operandi by abandoning the familiar mix and match cadaver quilting and moving into the realm of metaphysical outrages by enabling resurrection by way of soul transference. Perfecting a method of capturing the fleeing soul from the dead (there appears to be a one hour expiration on a successful capture, discovered through means too truncated and inconclusive to satisfy even this 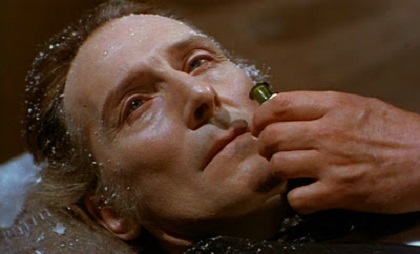 film’s  conspicuously lowered standard of shameless concession to incredulity), the Baron only needs to await the arrival of a conveniently fresh corpse (here in the form of a wrongly accused killer Hans[Robert Morris]) and a second (the disfigured Christina [Susan Denberg] with whom Hans was engaged in a secret dalliance during the time of the murder) in which to complete his immaterial exchange program. But to what end? Forever absent of an expressed scientific goal, the distinguishing characteristic of Hammer’s Frankenstein films seems to be the good doctor’s only real motive for continually bringing violent chaos to his surroundings is the compulsive scratchable itch of hubris. He can bring about disorder, so he will.

To read the complete review, click the following link to:  https://chandlerswainreviews.wordpress.com/nights-at-the-state-theater/

I've been a puppet, a pirate, a pauper, a poet, a pawn and a king, not necessarily in that order. My first major movie memory was being at the drive-in at about 1 1/2 yrs. old seeing "Sayonara" so I suppose an interest in film was inevitable. (For those scoring at home- good for you- I wasn't driving that evening, so no need to alert authorities.)Writer, critic and confessed spoiler of women, as I have a tendency to forget to put them back in the refrigerator. My apologies.
View all posts by chandlerswainreviews →
This entry was posted in British films, Drive-In Movies, fRANKENSTEIN, Hammer films, horror, movie reviews, movie sequels, Movies, Terence Fisher, women, writing and tagged Peter Cushing, Susan Denberg. Bookmark the permalink.

2 Responses to She Who Obeys: “Frankenstein Created Woman” (1967)