Posted on January 19, 2018 by chandlerswainreviews

The seeds of human extinction always seems more poetic (if not palatable) when seen through the prism of allegory. But is any message pleading for a cessation to the proliferation of hostility that ultimately leads to death and destruction ever usefully served when mired in an obscuring mountain of symbolism?

Mai Zetterling’s 1962 short film “The War Game”, not to be confused with Peter Watkins’ 1965 cautionary faux documentary, joins that slim roster of movies in which children are used as pawns in which the damaging effects of societal intolerance and political self-destruction are presented, less as a thoughtfully reasoned contributory voice, than as an exercise in manipulation: in which the film maker calculatedly relies on the instincts of the 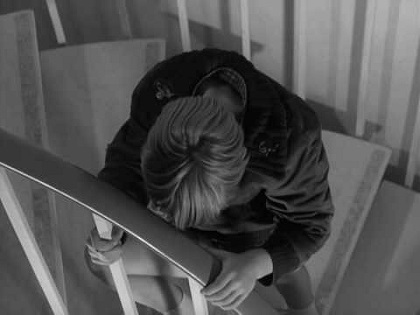 audience to react with a primal emotional response; to become reflexively protective when it comes to the suffering of children. Certainly, eliciting emotional responses from the audience is desirable by any director, but when even existential cruelties are specifically directed at the most helpless of targets, the desired response of outrage may be exponentially magnified, not necessarily as a result of an intellectually persuasive point-of-view but through deliberately provocative visceral embellishment. From such a limited context of manipulation, the response of the audience may be more a by-product of socially respondent conditioning than honest, profound moral consideration.  If incautiously used, this manipulative approach can easily cross the line between editorial and propaganda. Fortunately, Zetterling’s brief directorial debut is ultimately literal in its caveat against aggressive proliferation, but the film (until the final moments) is needlessly vague, ultimately collapsing under the burden of her ambition.

To read the complete review, click the following link to:  https://chandlerswainreviews.wordpress.com/short-films-the-other-cinema/

I've been a puppet, a pirate, a pauper, a poet, a pawn and a king, not necessarily in that order. My first major movie memory was being at the drive-in at about 1 1/2 yrs. old seeing "Sayonara" so I suppose an interest in film was inevitable. (For those scoring at home- good for you- I wasn't driving that evening, so no need to alert authorities.)Writer, critic and confessed spoiler of women, as I have a tendency to forget to put them back in the refrigerator. My apologies.
View all posts by chandlerswainreviews →
This entry was posted in children, Cold War, Mai Zetterling, movie reviews, Movies, politics, Reviews, short films, women, writing and tagged Mai Zetterling., women film directors. Bookmark the permalink.