Posted on July 23, 2014 by chandlerswainreviews

“Rio Lobo” reeks of exhaustion. The final film in the lengthy and often illustrious career of director Howard Hawks, this western is a continuation of a pattern of laconic narrative drifting that has increasingly characterized the greater number of his films during the latter period of his filmmaking career, including his well regarded but insanely overrated 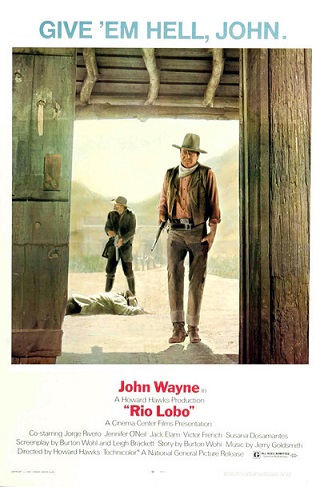 Both of those films (perhaps- or not -coincidentally also scripted by Leigh Brackett who contributed to Hawks’ earlier, impossibly labyrinthine “The Big Sleep”), regardless of  memorable individual sequences or even if charitably, viewed as an entertaining collective of spirited and energetic sequences fail to gel into a sound narrative whole with neither giving the impression of more than a valedictory assemblage of Hawks’ most familiar directorial signatures than of an actual structured dramatic arc. (One might easily enter the theater tardy at any point in these films without damage to appreciating the continued flow of events.) But it is the lack of passion-  rather than merely the lack of equally absent  energy  -that is the film’s most alarming characteristic; the fundamental passion which drives the western genre in its higher level of accomplishment as elemental morality plays.  Now, such dispassion is hardly unique to this film alone within the genre, in fact it is a fairly common condition within the morass of brainless copycat oaters which have proliferated the cinema since the silent days, but it is

attention worthy when such a film is both a John Wayne vehicle and one directed by esteemed Auteurist icon Howard Hawks; a strange bird as cultural icon, being a studio director of almost invisible artistic ambitions but a generously employed sense of fine-tuned craftsmanship  successfully employed in an impressive variety of film types including dramas, action films, screwball comedies (his output in this last is arguably unrivaled in defining the genre) but his western influence-  certainly the apprentice to Ford’s sorcerer  -has been wildly exaggerated and overpraised especially since his last three works in the genre are essentially variations of the same theme; an example of distressing creative anemia that would result, one would presume, in increasingly interesting offerings rather than just the opposite.

To read the complete review, click the following link to:  https://chandlerswainreviews.wordpress.com/now-playing-at-the-mercado-cinema/

I've been a puppet, a pirate, a pauper, a poet, a pawn and a king, not necessarily in that order. My first major movie memory was being at the drive-in at about 1 1/2 yrs. old seeing "Sayonara" so I suppose an interest in film was inevitable. (For those scoring at home- good for you- I wasn't driving that evening, so no need to alert authorities.)Writer, critic and confessed spoiler of women, as I have a tendency to forget to put them back in the refrigerator. My apologies.
View all posts by chandlerswainreviews →
This entry was posted in 1970's movies, Film, Film Criticism, Film Reviews, John Wayne, movie reviews, Movies, Reviews, westerns, writing and tagged Howard Hawks, Jack Elam, last films. Bookmark the permalink.