Posted on July 30, 2012 by chandlerswainreviews 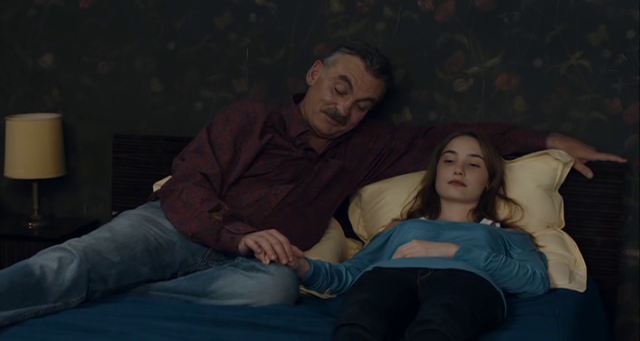 Deborah Francois is Laura, a university student turned prostitute and Alain Cauchi is Joe, a regular customer who leads her into disturbing paths, in Emmanuelle Bercot’s 2010 intellectually inert film of the controversial book “Mes cheres etudes”.

Emmanuelle Bercot’s “Mes chères études” (the title translates into “My Expensive Studies” as opposed to the English title “Student Services” which is reminiscent of far too many sniggery teen sex comedies) is a filmization of the pseudonymously penned book of the same name by “Laura D.”; an extremely downbeat film following the destructive path of a university student whose live spirals out of control when she enters into the sex trade business to pay her bills. In depicting a self-created mire that is insufficiently explored, the film never explains what draws Laura to the conclusion that her only salvation from a dire lack of funds while attending classes (she falls into a dead faint from hunger during one lecture) is the sordid road to prostitution.

I've been a puppet, a pirate, a pauper, a poet, a pawn and a king, not necessarily in that order. My first major movie memory was being at the drive-in at about 1 1/2 yrs. old seeing "Sayonara" so I suppose an interest in film was inevitable. (For those scoring at home- good for you- I wasn't driving that evening, so no need to alert authorities.)Writer, critic and confessed spoiler of women, as I have a tendency to forget to put them back in the refrigerator. My apologies.
View all posts by chandlerswainreviews →
This entry was posted in art house cinema, Film Reviews, French cinema and tagged cinema, culture, Entertainment, film, film reviews, Movies, sex, women. Bookmark the permalink.