Posted on November 25, 2018 by chandlerswainreviews

If one were to leave the theater a mere two minutes after the start of Ralph Thomas’ “A Pair of Briefs”, one might conclude that between the suggestively saucy title and the opening scene, in which Mary Peach is seen practicing her trial orations while clothed only in the most intimate apparel, that the film is an example of one of those cheeky sex comedies of which the British film industry found a peculiar fondness, 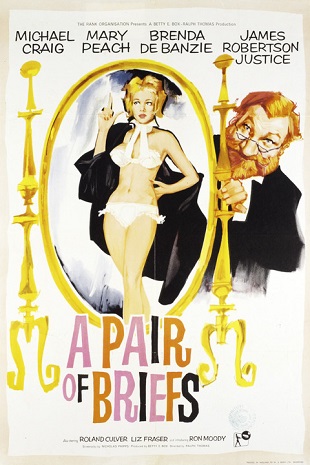 despite the outward appearance of being able to carry on with only a stiff upper lip. In fact, “A Pair of Briefs” is a slight, if charming, comedy which manages that most British of cinema exercises: the pursuit of chaste romance while gently skewering one of the grandly pompous institutions of the Empire, in this case, the judicial system.

The film’s success rests entirely on the charm of its principals, with jurisprudence suffering unfold fraudulent offenses in the service assuring that the road will be paved, without obstructions, for the enamored  couple (who in typical movie fashion, fail to express the most basic admissions of mutual attraction until the Happily Ever After fade out); with the consummation of family friendly levels of romantic declarations far outweighing the concerns of the Realm. As a legal comedy, it is a featherweight confection, with nary an cutthroat antagonist nor a despicable lawyer in view; an optimistically naïve professional view that, if not realistic, is nonetheless rather refreshing.

To read the complete review, click the following link to: https://chandlerswainreviews.wordpress.com/for-queen-and-country-the-british-cinema/

I've been a puppet, a pirate, a pauper, a poet, a pawn and a king, not necessarily in that order. My first major movie memory was being at the drive-in at about 1 1/2 yrs. old seeing "Sayonara" so I suppose an interest in film was inevitable. (For those scoring at home- good for you- I wasn't driving that evening, so no need to alert authorities.)Writer, critic and confessed spoiler of women, as I have a tendency to forget to put them back in the refrigerator. My apologies.
View all posts by chandlerswainreviews →
This entry was posted in British films, comedy, movie reviews, Movies, Romance, theater, women and tagged James Robertson Justice, John Standing, Mary Peach, Michael Craig, Ron Moody. Bookmark the permalink.