Posted on November 18, 2015 by chandlerswainreviews

PILLOW TALK: Dean Martin and Raquel Welch share tender thoughts despite the fact that she is kidnapped and held ransom by the leader of a gang of bank robbers who murdered her husband, in the psychologically baffling western “Bandolero!”.

A most peculiar entry in the western genre is Andrew V. McLagen’s “Bandolero!”, a film which gives a fresh-  though unpersuasive -perspective to the notion of the Stockholm Syndrome, is also a vehicle which is plagued by an inevitably distasteful indecisiveness as to a moral focus which might address the material in a manner which does not elicit an unresolved temporal provocation; a particularly troublesome problem of a lack of contextual integrity which results in a constant shifting of tone that chaotically veers from savage drama (the film is peppered with a great  deal of not always mercifully off-screen violent slaughter) to supposedly folksy humor, the last reserved for the “bad” guys of the piece, though 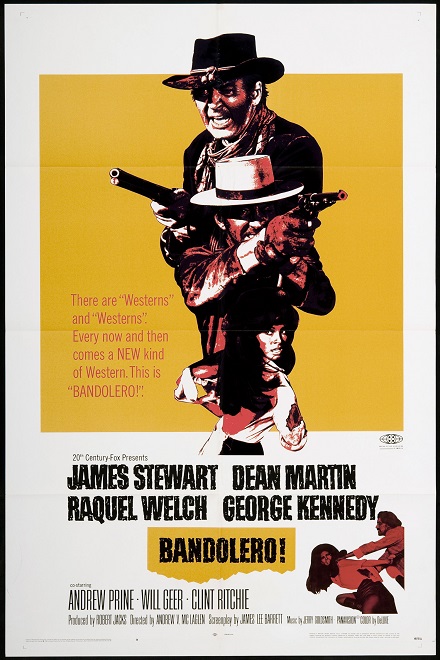 a natural sympathy seems to be awkwardly granted these characters since they are played by usual audience favorites Dean Martin and James Stewart, Thus when a woman’s husband is gunned down in cold blood during a robbery and the woman is later kidnapped by the same fugitive gang as a shield against the pursuing posse, the presumption might be for a tense  relationship between captor and victim instead of a warm and fuzzy meditation on burgeoning romance and a sentimental grab at second chances.

Just what is going on in “Bandolero!” is an example of the unease with which more traditionally  filmmakers are dealing with the seismic shift within the western genre: from morality to immorality plays. Traditional heroes were swiftly replaced with, not anti-heroes, but characters of disproportionately unsavory mercenary aims. If McLagen’s film is clear about anything it is that in dealing with the violently transitional period in American commercial filmmaking that occurred with the relaxation of the

industry’s rigid codes of morality (and the influx of a suddenly popular world market of film, which considering the bottom-line thinking within the movie community is an agent of change conveniently sidestepped in Hollywood’s historic version of its own of cultural evolution through a sudden transformative enlightenment), is that the first casualty of the traditional Hollywood mindset was the establishment of a consistent tone between the more comfortable (nee, tried and true) elements within the material and the panicked pandering to the presumed modernity of the audience’s taste.

To read the complete review,click the following link to:  http://chandlerswainreviews,wordpress,com/chandler-swain-reviews-nites-at-the-natick-drive-in/

I've been a puppet, a pirate, a pauper, a poet, a pawn and a king, not necessarily in that order. My first major movie memory was being at the drive-in at about 1 1/2 yrs. old seeing "Sayonara" so I suppose an interest in film was inevitable. (For those scoring at home- good for you- I wasn't driving that evening, so no need to alert authorities.)Writer, critic and confessed spoiler of women, as I have a tendency to forget to put them back in the refrigerator. My apologies.
View all posts by chandlerswainreviews →
This entry was posted in Drive-In Movies, Film Reviews, James Stewart, movie reviews, Movies, Reviews, Romance, westerns, women, writing and tagged Dean Martin. Bookmark the permalink.