POE IN THE CINEMA: “HISTOIRES EXTRAORDINAIRES” (1968)

Posted on July 12, 2010 by chandlerswainreviews

The cinema is rife with literary adaptations and the works of Edgar Allan Poe have fared surprisingly well as a good number of films have captured, if not the essence then the

spirit of the writer. Considering Poe essentially limited his fictional output to short stories and poems- many are internal character meditations, unpromising works for faithful cinematic translation- they represent daunting sources for easily expanded visual narratives. But the rare filmmaker is often remarkably resourceful, thus a work that may describe a limiting allegorical incident (“Pit and the Pendulum”) may be transposed into a formidable horror vehicle, pregnant with thematic associations from a wide field of the author’s works. Then again, hackery may be afoot.

“Histoires Extraordinaires” (U.S. title: “Spirits of the Dead”) is a tripartite anthology of adaptations taken from the lesser-known works of Poe, directed by three of the most notable European

directors of the 1960’s. The first segment, “Metzengerstein”, directed by Roger Vadim, concerns a sadistic libertine named Countess Frederica , awkwardly portrayed by then-Mrs. Vadim Jane Fonda as if she were searching the sets for any hint of direction. Frederica spends her waking hours tormenting her staff and guests until she becomes infatuated with her morally chaste cousin Wilhelm. (Uncomfortably cast with Fonda’s real-life brother Peter!) As the tragedy of the tale unfolds it is clear that the story is ill-suited for the coarse sensualist Vadim who, instead of developing a satisfying cinematic equivalent 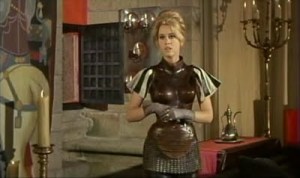 to Poe’s text, turns his segment into a ludicrous anti-erotic fashion show (replete with stiffly posed orgiastic tableaux) featuring the unfortunate Mrs. Vadim flouncing about in a different Barbarella outfit in, literally, every shot. This tale of spiritual degeneration is quickly reduced by the vulgarian director into a sniggery wallow in arrested sexual excess, with Ms. Fonda evidently less concerned with her immortal soul, than, as befitting the paucity of her wardrobe, the debilitating effects of drafts.

The second segment fares somewhat better only in that the director Louis Malle displays a modicum of respect for his source material, “William Wilson”, featuring Alain

Delon in the title role, a contumacious hedonist haunted by a doppelganger. The story unfolds proficiently but distantly, (a miscalculation of tone that the segment never recovers from) perfectly mirroring Delon’s disconsolate performance, until the story tepidly arrives at it’s obvious and telegraphed conclusion. An extended gambling sequence featuring Brigitte Bardot contributes little dramatically except to prove that she swallows with great distinction.

Which leaves the third and best segment: Frederico Fellini’s “Toby Dammit”, based on the satirical story “Never Bet the Devil Your Head”. Brilliantly photographed by Giuseppe Rotunno, in Fellini’s adaptation Toby is transformed into a famous (and famously degenerate) actor who is suffering an apocalyptic burnout. Travelling to Rome to star in a Wild West retelling of the story of Christ, Dammit arrives metaphorically (and emotionally) 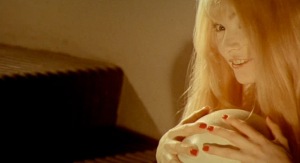 already dead; willingly teetering on the precipice of Hell. In the airport terminal he hallucinates a welcoming but sinister young girl (his evocation of the Devil) playing with a ball; an apparition he clearly has seen before. Outside the terminal, the sky is suffused with sulfurous swirls of orange and red (the exterior of Toby’s airline flight was similarly saturated) as if the atmosphere has been ignited with brimstone, and Toby, as played by the intensely magnetic Terence Stamp, is joyously resigned to his inevitable descent into the fiery abyss. In this unlikely context, Fellini unleashes his full smorgasbord of satirical jabs- religion, television, women, celebrity- and a magical symbiosis occurs, welding Poe’s textual 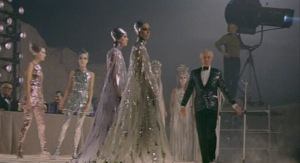 themes with Fellini’s flamboyant directorial designs to create an unprecedented portrait of psychic implosion: a stunning array of psychogenic mise-en-scenes proliferate with enticing succubus and mocking phantasmagoria. This is the film where the great director forever relinquished any adherence to realistic narrative. As visualized, Toby’s very existence becomes a dream-state but it is only Fellini’s felicity of wit that prevents the viewer from experiencing

that mindscape as an unrelenting nightmare. The film concludes with Toby’s prolonged journey through a labyrinthine purgatory that builds with simultaneous discomfort and comic tension until unleashing into the logical (and frankly, much improved) conclusion to Poe’s tale. Poe’s humor becomes Fellini’s comic hysteria in what is- ignoring the initial two segments as disappointing historical curiosities- one of the most innovative acts of creative filmmaking of the Sixties.

I've been a puppet, a pirate, a pauper, a poet, a pawn and a king, not necessarily in that order. My first major movie memory was being at the drive-in at about 1 1/2 yrs. old seeing "Sayonara" so I suppose an interest in film was inevitable. (For those scoring at home- good for you- I wasn't driving that evening, so no need to alert authorities.)Writer, critic and confessed spoiler of women, as I have a tendency to forget to put them back in the refrigerator. My apologies.
View all posts by chandlerswainreviews →
This entry was posted in 1960's movies, Brigitte Bardot, Edgar Allan Poe, Entertainment, Federico Fellini, Film Criticism, Film Reviews, Poe in the Cinema, Roger Vadim, Terence Stamp and tagged Alain Delon, Anthology film, Brigitte Bardot films, Edgar Allan Poe adaptation, European horror film, Fellini films, Jane Fonda films, Louis Malle films, Poe in the Cinema, Roger Vadim films, Terence Stamp. Bookmark the permalink.

1 Response to POE IN THE CINEMA: “HISTOIRES EXTRAORDINAIRES” (1968)