Posted on September 9, 2020 by chandlerswainreviews 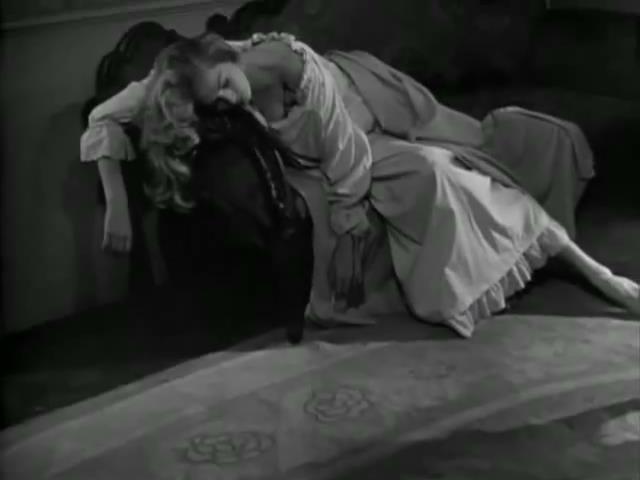 WOMAN IN VIOLENT REPOSE: This Vemeer-like opening image from Gerd Oswald’s “Valerie” sets the stage for a Western less interested in the who than in the why of what appears to be a spontaneous multiple killing.

and a simultaneous melodramatic bent in which even the most vital details of history were often less important than accurate period beading of costumes, is it any wonder that truth has emerged as an instinctively elusive element in the Hollywood cinema firmament?

Alfred Hitchcock once confused audiences and outraged critics in “Stage Fright” with the inclusion of a flashback of a character’s remembrance to be revealed as fraudulent; a perfectly legitimate narrative stratagem in keeping with the director’s celebrated penchant for viewer manipulation. Yet, in this instance, his directorial gamesmanship was met with derisive cries of “cheat” and “foul!”, as if he had betrayed an unwritten confidence between storyteller and patron; with a sudden and convenient epidemic of public amnesia that such trickery being the tool of a charlatan, only explanation in forgetting that the use of such manipulative shenanigans were precisely how Hitchcock gained his universal reputation in the first place. A mere two years later, Akira Kurosawa was applauded for handily obliterating the reliability of the dramaturgy of objective observation, though unlike Hitchcock, the deconstructive aims of “Rashomon” were met with universal applause, despite (or more likely, because of the finality in the film’s acquiescence of a radical reformation of traditional narrative to the realm of a deliberate unknowing. (Critics generally welcome the prospect of  the “artistically’ obtuse as it affords the appreciative reviewer a belief that they hold intellectual prestige over their audience).

Occupying a middle ground between Hitchcock’s bald manipulation and the structural formality of Kurosawa‘s designed obscurity, Gerd Oswald’s surprisingly absorbing “Valerie” opens with an abrupt pre-credit massacre after which the film appears to settle into the guise of a fairly pedestrian trial drama in which the opening events will be explained. Adding to the curious nature of circumstance is the fact that the killings are perpetrated by a man whose reputation as a Civil War hero and local figure of prominent stature is announced as being unimpeachable; while his wife Valerie, who has miraculously survived the shooting, is publicly derided as a trollop deserving of her fate.

To read the complete review, click the following link to:  https://chandlerswainreviews.wordpress.com/nights-at-the-st-george-theater/

I've been a puppet, a pirate, a pauper, a poet, a pawn and a king, not necessarily in that order. My first major movie memory was being at the drive-in at about 1 1/2 yrs. old seeing "Sayonara" so I suppose an interest in film was inevitable. (For those scoring at home- good for you- I wasn't driving that evening, so no need to alert authorities.)Writer, critic and confessed spoiler of women, as I have a tendency to forget to put them back in the refrigerator. My apologies.
View all posts by chandlerswainreviews →
This entry was posted in Movies and tagged Anita Ekberg, Gerd Oswald, Rashomon, Sterling Hayden. Bookmark the permalink.