Posted on April 13, 2019 by chandlerswainreviews

For the advanced connoisseur of sexploitation sleaze, “Jennie, Wife/Child” is bound to disappoint. But for those truly 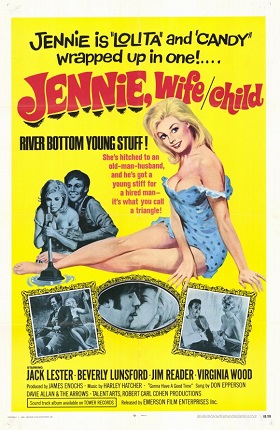 interested in the cinema in all of its permutations, and the small, unexpected demonstrations of unheralded accomplishment in the most unlikely of vehicles, there is much to consider, even admire, in this umpteenth telling of the jealous farmer and his sexy but unhappy (not to mention unsatisfied) young trophy bride.

the fact that Mario is often shirtless and sweaty despite the fact that he rarely engages in labor more strenuous  than trying to remember which chores to do. Peckingpaw catches his wife in flagrante delicto merely by hearing her giggle (the film is surprisingly chaste), a demonstration of far more active imagination than the farmer has previously exercised. Naturally, being the product of heated melodrama, Peckingpaw reacts not with reason or self-reflection, but with the planning of a murderous revenge.

To read the complete review, click the following link to: https://chandlerswainreviews.wordpress.com/poverty-row/

I've been a puppet, a pirate, a pauper, a poet, a pawn and a king, not necessarily in that order. My first major movie memory was being at the drive-in at about 1 1/2 yrs. old seeing "Sayonara" so I suppose an interest in film was inevitable. (For those scoring at home- good for you- I wasn't driving that evening, so no need to alert authorities.)Writer, critic and confessed spoiler of women, as I have a tendency to forget to put them back in the refrigerator. My apologies.
View all posts by chandlerswainreviews →
This entry was posted in Drive-In Movies, grindhouse, movie reviews, Movies, music, Reviews, Romance, women, writing and tagged Beverly Lunsford, exploitation cinema, Vilmos Zsigmond. Bookmark the permalink.