Posted on January 26, 2019 by chandlerswainreviews 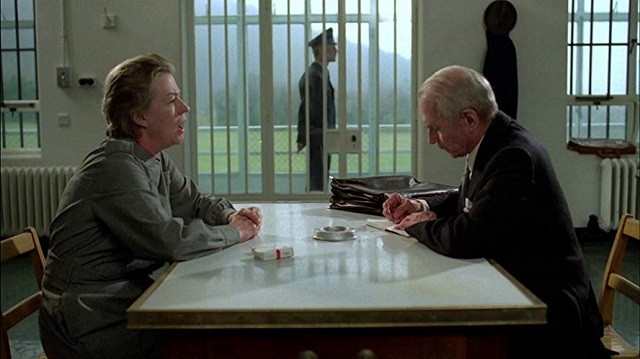 Beware actors who protest their image too much. In the case of Franklin J. Schaffner’s “The Boys From Brazil”, the thespian in question is none other than venerable good guy Gregory Peck who makes a career backflip to the darker regions of human nature by tackling the role of nefarious Nazi Doctor Josef Mengele, a turn of dramatic ambitions that Peck seems to relish, yet is sadly inadequate to the task. Not that he’s assisted by surrounding cast of scenery munching screen Aryans including an odd turn by the usually reliable James Mason who plays his Nazi conspirator as a tourist of Key West club spots. The film follows the plot of Ira Levin’s source novel fairly closely, though Levin’s signature finales with evil seemingly emerging triumphant is obscured in no small part by a terribly staged final confrontation and the ruinous, multiplied non-presence of newcomer Jeremy Black, perhaps the worst motion picture discovery since Smell-O-Vision, though equally odoriferous. This mineral deposit impersonating an actor has been generously granted the opportunity to fail in several roles, each distinguished by a different accent, none of which resembles a legitimately recognized echo of human speech.

I've been a puppet, a pirate, a pauper, a poet, a pawn and a king, not necessarily in that order. My first major movie memory was being at the drive-in at about 1 1/2 yrs. old seeing "Sayonara" so I suppose an interest in film was inevitable. (For those scoring at home- good for you- I wasn't driving that evening, so no need to alert authorities.)Writer, critic and confessed spoiler of women, as I have a tendency to forget to put them back in the refrigerator. My apologies.
View all posts by chandlerswainreviews →
This entry was posted in books, Gregory Peck, Laurence Olivier, movie reviews, Movies, music, Reviews, science, World War II and tagged cloning, Ira Levin, Rosemary Harris, Uta Hagen. Bookmark the permalink.