Posted on December 23, 2018 by chandlerswainreviews 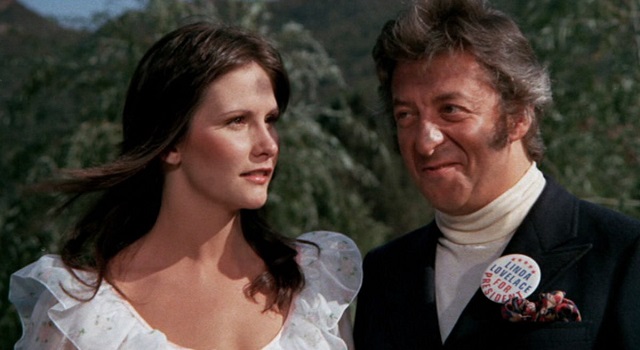 Chances are that if a movie announces upfront that it intends to offend every member of the audience, the results will be fairly pedestrian, as a truly provocative feature would

let the material speak for itself. “Linda Lovelace for President” does manage to offend, but only in that ho-hum way of the truly awful. As a comedy, the film manages to be uniformly unfunny, certainly not a unique accomplishment what with dozens of competitive examples unleashed upon the public every year; though with its rapid fire Hellzapopin’– style of anything for a laugh jokiness, this film may qualify for some sort of quantitative honorarium for negative achievement simply the sheer number of witless swings and misses it mistakenly presents as humor.

of the Sexual Revolution’s Mother Courage would emerge five year later), one might suppose that the direction of the film would take would somehow put a comedic spin on how sex and politics make for strange (if not unfamiliar) bedfellows. However, the extremely scattershot nature of the film is a prolonged and agonizing stream of consciousness of aimless, tired crudity resulting in an experience that is the cinematic version of Tourette syndrome.

To read the complete review, click the following link to: https://chandlerswainreviews.wordpress.com/remembrance-of-films-forgotten/

I've been a puppet, a pirate, a pauper, a poet, a pawn and a king, not necessarily in that order. My first major movie memory was being at the drive-in at about 1 1/2 yrs. old seeing "Sayonara" so I suppose an interest in film was inevitable. (For those scoring at home- good for you- I wasn't driving that evening, so no need to alert authorities.)Writer, critic and confessed spoiler of women, as I have a tendency to forget to put them back in the refrigerator. My apologies.
View all posts by chandlerswainreviews →
This entry was posted in comedy, grindhouse, Linda Lovelace, movie reviews, Movies, politics, racism, Reviews, sex, women, writing. Bookmark the permalink.