Posted on December 9, 2018 by chandlerswainreviews 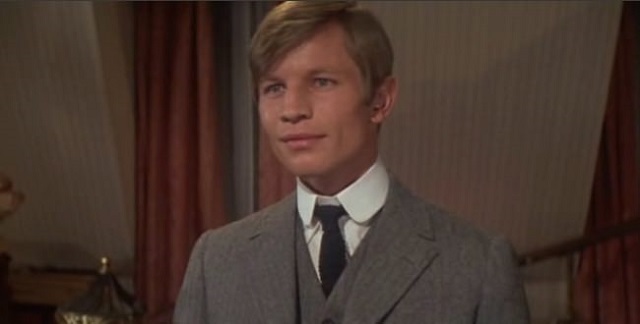 The staggering cost in human lives resulting from global conflicts is reemphasized in Etienne Perier’s World War I adventure “Zeppelin”, one of those myriad cinema fantasies in which the fate of the War, if not the world, is reliant on the quick thinking 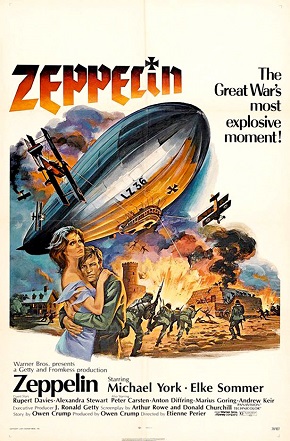 and romantic attraction of a solitary intelligence agent, here played by an unlikely Michael York. Such a victory might also come with the participation other factors, such as armies, battle strategies and civilian sacrifice during the depletion of wartime resources; none of which seems to be a pertinent factor here, whereas the cut of Alexandra Stewart’s negligee seems of be of heretofore underappreciated vital national importance.

York portrays Scotsman Geoffrey Richter-Douglas, a lieutenant in the British Army during World War I, who meets a beautiful woman at a party named Stephanie (Stewart), who just happens to be a German spy and with whom he falls in love. She attempts to convince him to desert and return to the bosom of the Germanic side of his family, a suggestion that is all too amenable to his superiors who wish the lieutenant to become a spy and use his family’s connections to somehow penetrate the obviously lax security of German military intelligence and gather valuable information on the LZ36, the newest version of their Zeppelin airship; an improved version of the one shown terrorizing London in the opening scenes.

Geoffrey’s defection is staged with a minimum of the theatricality for which British Intelligence has become famous in the movies (a bullet wound in the upper arm is deemed sufficient to grant him credibility) and before Roy Budd’s spirited escape music has a chance to subside from memory, Geoffrey is already safely embraced to the bosom

of German Intelligence (who have their own motives in activating Geoffrey’s desertion from England in the first place) and will have conveniently bumped into an old family friend, Professor Altshul (Marius Goring, in a performance packed with so much barely contained eccentricity, it makes you wonder why Michael Ripper wasn’t cast in the role), who, just as conveniently, happens to be the engineering genius behind the new LZ36. Possible complications arise with Geoffrey’s introduction to Altshul’s new young bride, Erika (Elke Sommer), a fellow engineer who immediately assumes Geoffrey is a spy (could it be the Scot-German’s clipped Oxford accent?), though she never acts on her suspicions.

To read the complete review, click the following link to:  https://chandlerswainreviews.wordpress.com/nights-at-the-aspen-hill-cinema/

I've been a puppet, a pirate, a pauper, a poet, a pawn and a king, not necessarily in that order. My first major movie memory was being at the drive-in at about 1 1/2 yrs. old seeing "Sayonara" so I suppose an interest in film was inevitable. (For those scoring at home- good for you- I wasn't driving that evening, so no need to alert authorities.)Writer, critic and confessed spoiler of women, as I have a tendency to forget to put them back in the refrigerator. My apologies.
View all posts by chandlerswainreviews →
This entry was posted in espionage, History, London, Michael York, Movies, Romance, war movies, women, writing and tagged Alexandra Stewart, Elke Sommer, Zeppelins. Bookmark the permalink.