Posted on November 15, 2018 by chandlerswainreviews 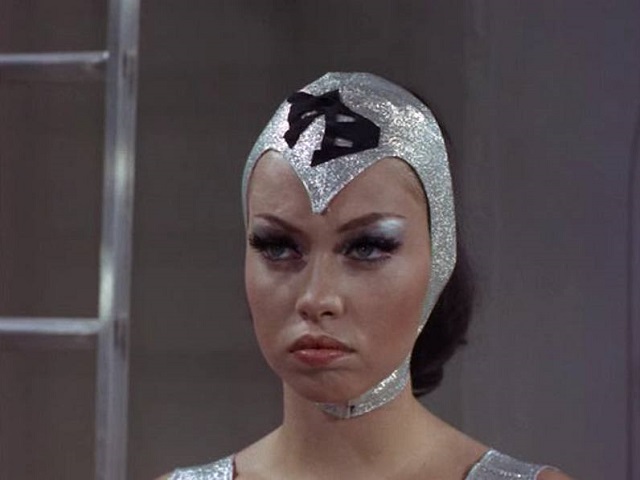 The most meritoriously insignificant of films, surely among which Byron Mabe’s “Space Thing” may be unhesitatingly included, may often offer themselves up as the bearers of small life lessons concerning the creative miasma known as filmmaking. Through its own embarrassing example of dollar store production values, one nostrum

for aspiring cineastes of all stripes-  an adherence to which might alleviate a great deal of consternation further along the production process  – might be in a serious consideration of not actually making the film if you lack the minimum of necessary resources; such as the purchase of paper on which to jot down a script. This caveat might be especially true if your idea for the film can be described with a minimum of no words or less.

Considering the complete absence of sexiness in “Space Thing”, the only novelty to engage interest is the supposed science fiction context in what is otherwise merely an extremely tired succession of sexual couplings that are so anemic in their staging and performance that it is quite possible none of the encounters intends to or reaches a level beyond lightweight petting. It is most revealing to ponder the lack of necessity of the film’s location in outer space, as if the pretense of using the traditions of the science fiction film would act as a commercial enhancement promising an elevation to the usual parade of disengaged mattress couplings, but as an example of the SF film,”Space Thing” is as legitimate a contribution to the expanding intellectual reach of the genre (released in the same year as “2001: A Space Odyssey”, “Planet of the Apes” and “Charly”) as would be any suggestion that 1950s nudist camp films merit reevaluation as studies in Cold War geopolitics.

To read the complete review. click the following link to:  https://chandlerswainreviews.wordpress.com/sticky-floors-stained-screens-days-nights-at-the-grindhouse/

I've been a puppet, a pirate, a pauper, a poet, a pawn and a king, not necessarily in that order. My first major movie memory was being at the drive-in at about 1 1/2 yrs. old seeing "Sayonara" so I suppose an interest in film was inevitable. (For those scoring at home- good for you- I wasn't driving that evening, so no need to alert authorities.)Writer, critic and confessed spoiler of women, as I have a tendency to forget to put them back in the refrigerator. My apologies.
View all posts by chandlerswainreviews →
This entry was posted in grindhouse, movie reviews, Movies, science fiction, sex, Sex in Cinema, women and tagged Cara Peters, sexploitation. Bookmark the permalink.