Posted on November 10, 2018 by chandlerswainreviews 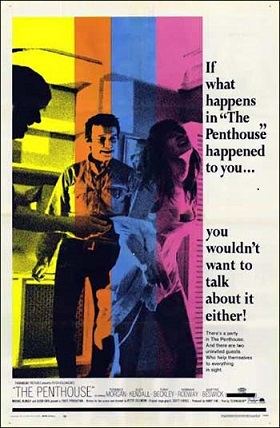 (Terence Morgan), a real estate broker who is enjoying a tryst with his mistress Barbara (Suzy Kendall), during which they terrorize the couple and subject Barbara to multiple acts of rape. Peter Collinson’s debut feature, based upon the Scott Forbes play The Meter Man, is a precursor of far more notorious depictions of domesticity undone through violent invasion by Sam Peckinpah and Michael Haneke, though fortified with the obtuse Pinteresque nature of the script (adapted by Collinson), the film lacks a comforting clarity of thematic intention in which the film can be casually viewed as a variation of prior, more straightforward dramas dealing with anarchic forces disrupting the placid surface of middle class tranquility.

“The Penthouse” is a thriller that wastes no time in setting up its mousetrap of psychological dominance, yet spares not a single moment in interpreting the actions, statements and motivations of the intruding characters. The majority of the dialogue is relayed as continuous argumentum ad absurdum, a surreal verbosity which results in equal frustration of the hostage characters and the audience; though for the latter, there 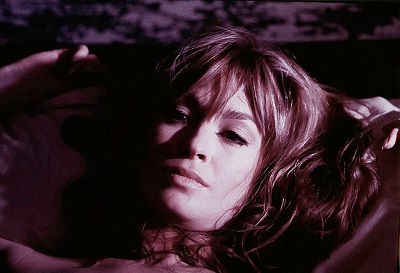 are stimulating compensations as there is adequate evidence that the film is not intended to be viewed through the prism of realism  (albeit with heavily italicized black comic elements), but as an example of the Theater of the Absurd. Certainly Tom and Dick’s verbal gamesmanship leaves the hostages and the audience upended with their relentless bipolar assault of disorienting sardonic verbal comments laced with truly frightening moments of pathological rage; a torturous session of psychological humiliation that unaccountably shifts from the apoplectic to the supercilious.

To read the complete review, click the following link to:  https://chandlerswainreviews.wordpress.com/remembrance-of–films-forgotten/

I've been a puppet, a pirate, a pauper, a poet, a pawn and a king, not necessarily in that order. My first major movie memory was being at the drive-in at about 1 1/2 yrs. old seeing "Sayonara" so I suppose an interest in film was inevitable. (For those scoring at home- good for you- I wasn't driving that evening, so no need to alert authorities.)Writer, critic and confessed spoiler of women, as I have a tendency to forget to put them back in the refrigerator. My apologies.
View all posts by chandlerswainreviews →
This entry was posted in British films, crime, movie reviews, Movies, Mystery, Reviews, theater, women, writing and tagged Martine Beswick, Peter Collinson, Suzy Kendall. Bookmark the permalink.