Posted on September 4, 2018 by chandlerswainreviews 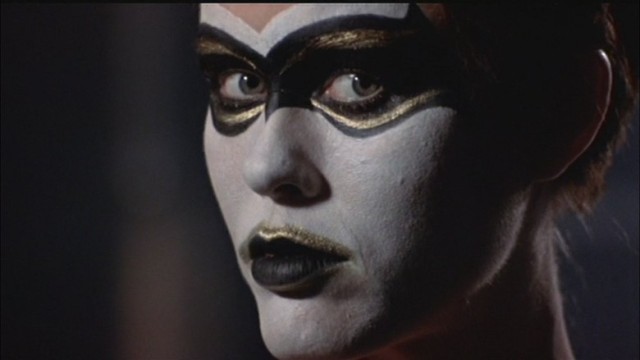 Former Secret Service agent Gerald Petievich’s novel “To Live and Die in L.A.” might have seemed a natural for cinematic adaptation, given that the book is written in such a lean, spare style that it practically screams “film treatment”; the composition of the book 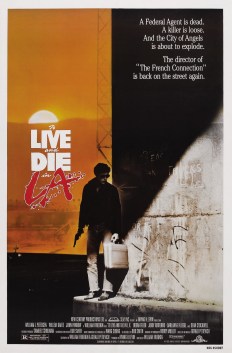 marked by alternating a detailed, though stylishly unimaginative descriptions of settings (the selection of shooting locations and compilation of elements for the director’s mise-en-scene practically jump off the page) with dialogue imbued with that faux hard-boiled tone popular with scenarists who mistake cynical plot synopsis for revealing conversation (a comparison with the novels of George V. Higgins illustrates the difference between dialogue as character and talk as mere plot momentum).

The novel also features rival parallel investigations by Los Angeles based Secret Service agents to nab the notorious counterfeiter Rick Masters, structurally assuring the illusion of increased intensity of suspense, but actually diluting the competing ends of the procedural aspects of the story, especially when the character lines are diverted in unnecessary directions such as Agent Hart’s encounters with a new neighbor whose apartment has been robbed. The insertion of this awkwardly conceived minor subplot- which goes no where and has no relevance to either the plot nor reveals untold nuances of character -may hint at a romantic relationship, but it is entirely extraneous to the narrative and imprudently halts the momentum of the book.

To read the complete review, click the following link to:  https://chandlerswainreviews.wordpress.com/views-from-the-screening-room/

I've been a puppet, a pirate, a pauper, a poet, a pawn and a king, not necessarily in that order. My first major movie memory was being at the drive-in at about 1 1/2 yrs. old seeing "Sayonara" so I suppose an interest in film was inevitable. (For those scoring at home- good for you- I wasn't driving that evening, so no need to alert authorities.)Writer, critic and confessed spoiler of women, as I have a tendency to forget to put them back in the refrigerator. My apologies.
View all posts by chandlerswainreviews →
This entry was posted in books, crime, Los Angeles, Movies, Reviews, William Friedkin, writing and tagged books into movies, counterfeiting, Dean Stockwell, Secret Service, Willem Dafoe. Bookmark the permalink.