Posted on July 5, 2018 by chandlerswainreviews

Just when you think that the documentary coverage of The Beatles had reached the saturation point, along comes Ron Howard’s “The Beatles: Eight Days a Week- The Touring Years” which fails to add anything new worthy factual revelations to the already voluminous coverage of The Fab Four, but what it achieves, and it does so excitingly well, at least in the first half of the film, is to recreate the frenzied sensation that was that was known as Beatlemania-   surprisingly sweet in 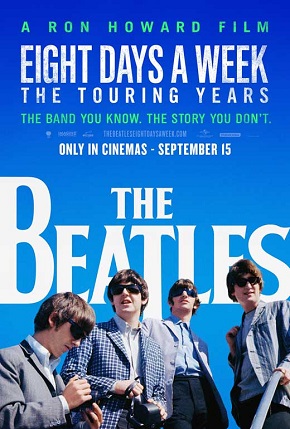 nature, and this is he only film to openly rely on this phenomenon as its driving engine since 1978’s delightful “I Wanna Hold Your Hand”   -generated by a particular quartet from Liverpool. However, in doing so, Howard disappointingly squanders opportunities he himself creates by effectively accounting for only one half of his subject’s potential.

That the scale of this innocent enthusiasm is repeatedly referenced as historic, and that the unchecked energies of the extraordinary numbers of fanatical fans compressed into unnaturally confined areas led to incidents of unintended destruction and injury was a sign that something new and impactful on a grand scale was afoot; it was if all of those hysterical premonitions from 1950’s morality soapboxes concerning the lure of the “devil music” (despite the fact that much of that consternation was prejudicially based upon rock and roll being an evolutionary offspring of black centric rhythm and blues) had come to fruition of an epic scale. However, what minimizes the film is its complacency in giving a first-hand accounting of this very frenzy surrounding The Beatles’ concert tours from the perspective

of those most closely associated with those  spontaneous eruptions of individual emotional delirium, which when multiplied by millions, created a game changing cultural phenomenon: the fans themselves. There are a number of newly filmed recollections from celebrity admirers such as Eddie Izzard, Sigourney Weaver and Whoopi Goldberg (who provides the most heartfelt moments in the film), but in limiting the bulk of the reminiscences to well known personalities, Howard fails to follow through on the greater story he is tackling: the everyday teens who comprised the vast bulk of The Beatles’ fandom. Surely it would have been possible with a minimum of detective work to track down some of the excited youths who appear in the concert footage, and absent this first-hand reminiscence, Howard misses the opportunity to plumb extra dimensions from the perpetually overlooked partner in the Beatlemania phenomenon.

To read the complete review, click the following link to: https://chandlerswainreviews.wordpress.com/documentaries/

I've been a puppet, a pirate, a pauper, a poet, a pawn and a king, not necessarily in that order. My first major movie memory was being at the drive-in at about 1 1/2 yrs. old seeing "Sayonara" so I suppose an interest in film was inevitable. (For those scoring at home- good for you- I wasn't driving that evening, so no need to alert authorities.)Writer, critic and confessed spoiler of women, as I have a tendency to forget to put them back in the refrigerator. My apologies.
View all posts by chandlerswainreviews →
This entry was posted in History, movie reviews, Movies, music, Reviews, The Beatles and tagged Brian Epstein, Jesus, Richard Lester, Ron Howard, The Beatles, Whoopi Goldberg. Bookmark the permalink.