Posted on October 21, 2017 by chandlerswainreviews

God bless English servitude, for without domestic help, with whom would the eccentrics of the privileged ranks commiserate? “What the Butler Saw”- not to be confused with the Joe Orton play of the same name -is a comedy which derives its humor equally from

both the standard formulas of cross cultural clashes and the introduction of disorder into the life of a figure whose role in life is defined by the observance of orderly propriety, in other words, an example of the long standing British tradition of simultaneously exalting and kicking the ankles of their titled classes.

Returning to his estate after an absence of ten years as the Governor of  the Coconut Islands, a dotty Earl (Edward Rigby), accompanied by his stalwart butler Bembridge (Henry Mollison), begins to unload crates filled with hunting trophies (these Pacific islands somehow fully stocked with alligators, crocodiles and leopards and …is that a rhino?) when Bembridge discovers a stowaway: native Princess Lapis (Mercy Haystead), Hiding within one of the shipped boxes, the young royal is eager to continue what has obviously been a heavily romantic relationship with the not-quite-unflappable servant. Her presence creates a 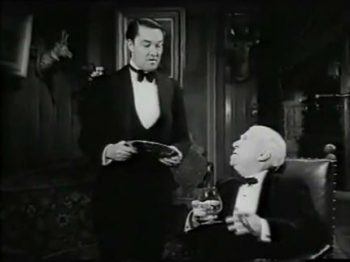 greater strain between the snooty class disdain of the Earl’s daughter, Lady Marly (Eleanor Hallam) and grandson Gerald (Michael Ward), who is prone to expressing  exasperation over what both the Earl’s behavior and Lapis’ surprise appearance will have on his position at the Foreign Office. Attempting to contain a possible scandal becomes secondary when Lapis’ father, a King on one of the Islands, asserts declarations of a possible war sparked over his mistaken belief that his daughter has been abducted.

To read the complete review, click the following link to:  https://chandlerswainreviews.wordpress.com/hammer-time/

I've been a puppet, a pirate, a pauper, a poet, a pawn and a king, not necessarily in that order. My first major movie memory was being at the drive-in at about 1 1/2 yrs. old seeing "Sayonara" so I suppose an interest in film was inevitable. (For those scoring at home- good for you- I wasn't driving that evening, so no need to alert authorities.)Writer, critic and confessed spoiler of women, as I have a tendency to forget to put them back in the refrigerator. My apologies.
View all posts by chandlerswainreviews →
This entry was posted in British films, comedy, Hammer films, movie reviews, Movies, Reviews, Romance, women, writing and tagged Mercy Haystead, P.G. Wodehouse, The Admirable Crichton. Bookmark the permalink.