Posted on March 28, 2016 by chandlerswainreviews 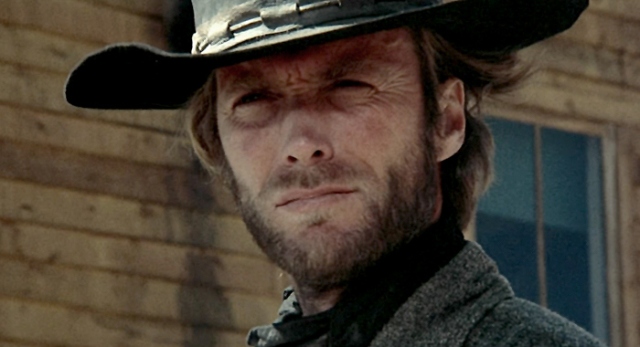 The following article contains discussions of details which the weak of heart might regard as “spoilers”. So, readers are advised approach with a sensible level of caution.

There’s something wrong in the town of Lago. When a drifter rides into town, there are none of the usual indicators of a healthy, thriving community, but rather those of a breeding ground of antisocial animus, marked by a suffocating suspicion and paranoia. The rider quietly passes by a tableau of confused and fearful faces; 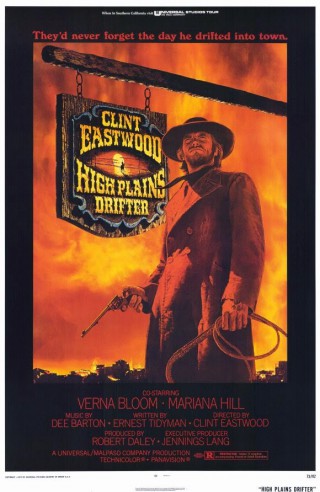 figures either frozen with paralytic dread, or hiding behind the safety of windows which are pathetically transparent in disguising the uniformly palpable anxiety emitted by the citizens of Lago, like a collective pheromone of desperation.It is clear there is something hanging over the minds of the townspeople; a secret whose unraveling, and the closure of which, will provide the moral fulcrum of the drama to follow.

Thus begins Clint Eastwood’s third directorial effort, “High Plains Drifter”; a confused bit of frontier misanthropy, presenting the citizens of the West as unrelievedly corrupt, cowardly, immoral and mean-spirited; a portrait so unrelentingly unforgiving, it is absent of even the equally pessimistic. but far more intelligently conceptualized. amoral center dominating the revisionist perspective of the American West in Sam Peckinpah’s seminal “The Wild Bunch”, as in comparison, Eastwood’s film suffers from a core vacuum: a missing example of any code of honor (among the townsfolk, despite a bonding born of felonious convenience, they seldom miss an opportunity to enjoy each other’s discomfort), even among the most lowly bred. This absence of a codifying bond eventually become problematic in a film claiming a thematic preoccupation with retributive closure as it continuously waffles in an inevitable collision between the-  what are presented as justifiable  -actions of its protagonist, versus the film’s loftier metaphysical suggestions fueling its thematic intentions.

To read the complete review, click the following link to:  https://chandlerswainreviews.wordpress.com/nights-at-the-langley-theater/

I've been a puppet, a pirate, a pauper, a poet, a pawn and a king, not necessarily in that order. My first major movie memory was being at the drive-in at about 1 1/2 yrs. old seeing "Sayonara" so I suppose an interest in film was inevitable. (For those scoring at home- good for you- I wasn't driving that evening, so no need to alert authorities.)Writer, critic and confessed spoiler of women, as I have a tendency to forget to put them back in the refrigerator. My apologies.
View all posts by chandlerswainreviews →
This entry was posted in clint eastwood, Film Reviews, movie reviews, Movies, Reviews, westerns, women, writing and tagged ghosts, Sergio Leone. Bookmark the permalink.