Posted on April 21, 2014 by chandlerswainreviews

Essentially a filmed record of the successful Broadway review originally titled “The New Faces of 1952”, the film version retains most of the original stage version’s talent including such notable talents as Paul Lynde, Ronny Graham, Alice Ghostley, Eartha Kitt, Carol Lawrence, Robert Clary and a sketch writer by the name of Melvin Brooks. The film adds a 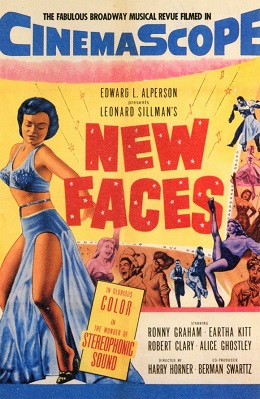 trivial storyline to give the revue structure a semblance of being part of a wider conception though its random insertion between sketches or musical numbers actually intrudes on the almost documentary flavor of the movie, with the tepid connective plot involving the acquisition of funds to keep the show going while locking the creditor in a dressing room (with Graham and Clary all of a sudden playing fictional versions of themselves, which contradicts and undercuts the intention of the film being a program deliberately intended to headline real personalities and not fictional manifestations); material which is dismal in both conception and execution and while also belies the often startlingly impressive talent on display in the film’s musical numbers (especially in the dance in which there are several breathtaking moments which might put Gene Kelly to shame) and certainly lacking the more disciplined and practiced comic timing of the sketch material. That is not to say that every segment is a gem, but the treasures to be found tend to outweigh the more mundane moments; and certainly, as the revue structure might suggest, if the material is lacking there is always the promise of something new only minutes away.

To read the complete review, click the following link to:  https://chandlerswainreviews.wordpress.com/remembrance-of-films-forgotten/

I've been a puppet, a pirate, a pauper, a poet, a pawn and a king, not necessarily in that order. My first major movie memory was being at the drive-in at about 1 1/2 yrs. old seeing "Sayonara" so I suppose an interest in film was inevitable. (For those scoring at home- good for you- I wasn't driving that evening, so no need to alert authorities.)Writer, critic and confessed spoiler of women, as I have a tendency to forget to put them back in the refrigerator. My apologies.
View all posts by chandlerswainreviews →
This entry was posted in black cinema, comedy, dance, Eartha Kitt, Film Reviews, movie reviews, Movies, Musicals, Reviews, theater and tagged Alice Ghostley, Mel Brooks, Paul Lynde. Bookmark the permalink.