Posted on April 16, 2014 by chandlerswainreviews 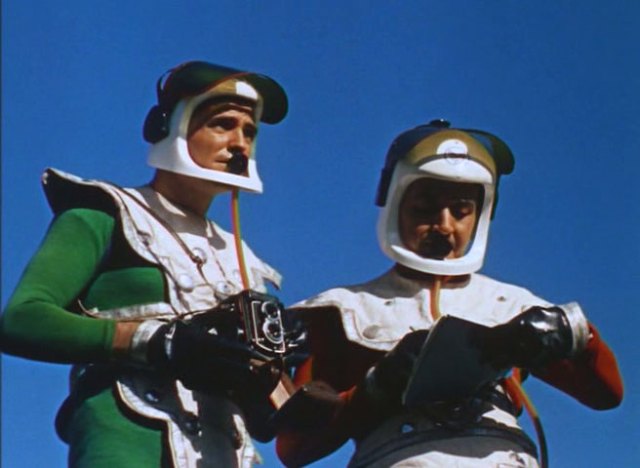 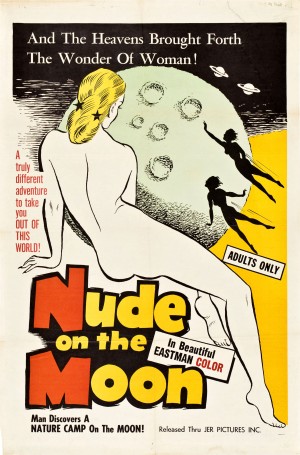 photographer Raymond Phelan and producer Doris Wishman collaborated under the directorial pseudonym Anthony Brooks (they also co-wrote the script under the alias O.O. Miller) to create the world’s first “adult” outer space movie (a designation meaningful only in terms of the amount of exposed skin on view and without any referencing to the level of sophistication present either in the film’s concept or execution) with the 1961 naturist feature “Nude on the Moon”, though with the exception of a few predictably terrible miniatures and effects shots, the film is drearily earthbound, as the moonscape is inexplicably depicted as a tropical tourist trap which is fortunate as that it what it actually is: the film’s lunar sequences filmed about the grounds of Florida’s Coral Castle, the lush vegetation and kitschy architecture somewhat inconsistent with what was known about the Moon at the time, nor are these anomalies given any deep consideration except for a wistful shrug (perhaps an intellectual lapse being the direct consequence of lightheadedness as the pair’s space helmets are open to the acknowledged alien atmosphere). “Solaris” this ain’t.

The film introduces two scientists, Professor Nichols (William Mayer) and Dr. Huntley (Lester Brown), the former the senior mentor immediately identifiable by the pipe he contemplatively sucks on, and the latter identified as “one of the brightest young rocket scientists” who demonstrates his dedication to his field by ignoring the embarrassing come

hither looks of secretary Cathy (Marietta). Finding himself the recipient of a large inheritance, Huntley concludes that he and Nichols will be able to prepare a rocket to travel to the moon within six months, a challenge the Professor is uncertain they are up to as “it means a lot of hard work, long hours and lots of black coffee”, demonstrating the scientific tenacity of a roadside restaurant hostess. Such visionary dedication would presumably call for feverish preparations which are demonstrated as Nichols sits before a series of gurgling flasks as if he were in an exploitation version of “The Man in the White Suit”, all the while there is never any consideration to the notion that at some point someone had better think about constructing a rocket as a part of the project’s grand design.

To read the complete review, click the following link to:  https://chandlerswainreviews.wordpress.com/sticky-floors-stained-screens-days-nights-at-the-grindhouse/

I've been a puppet, a pirate, a pauper, a poet, a pawn and a king, not necessarily in that order. My first major movie memory was being at the drive-in at about 1 1/2 yrs. old seeing "Sayonara" so I suppose an interest in film was inevitable. (For those scoring at home- good for you- I wasn't driving that evening, so no need to alert authorities.)Writer, critic and confessed spoiler of women, as I have a tendency to forget to put them back in the refrigerator. My apologies.
View all posts by chandlerswainreviews →
This entry was posted in 1960's movies, comedy, erotica, Film Reviews, grindhouse, movie reviews, Reviews, Romance, science fiction and tagged Doris Wishman, exploitation, nudie cuties, space race. Bookmark the permalink.