Don’t Let This Happen To You!: “Hollywood Rat Race” by Ed Wood, Jr.

Posted on June 10, 2013 by chandlerswainreviews
“The fragrance of the roses has wafted to you from all directions, mostly from a bunch of smelly characters. The thorns will become even more prevalent as the flowers wither and the perfume disintegrates into thin air. The thorns of the real entertainment world, where all the filth has been purposely perfumed, will be ever present as you try to make your way in the business.”
– Edward D. Wood Jr., from Hollywood Rat Race

A notorious schlockmeister, whose films appear to have become more palatable due to his rather generous canonization in the 1994 Tim Burton biopic “Ed Wood“, Edward D. Wood, Jr. has been misleadingly labelled with the dual distinction as maker of the worst film of all time, “Plan 9 From Outer Space” (it isn’t) and as the worst director of all time (he isn’t), an infamy conferred with the 1980 publication of  Harry & Michael Medved’s The Golden Turkey Awards, a smarmy and uninformed volume written to reinforce the then-burgeoning and now prevalent misconception that useless sarcasm may 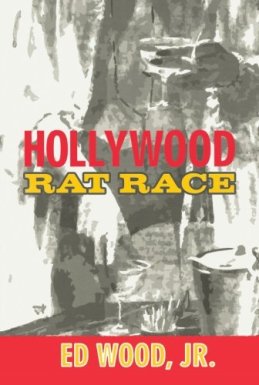 successfully masquerade as legitimate film criticism. Wood’s films are neither as repellant as indicated by the brothers Medved , nor as interesting as suggested with the indiscriminate publication of photos featuring Vampira, Tor Johnson and Bela Lugosi as championed in the Forrest J. Ackerman incarnation of Famous Monsters of Filmland magazine, but rather a precursor to the pretense of artistic sensibilities within the New Hollywood generation of writers and directors who learned everything they know of life from the movies (which means they know nothing), except for how to cobble together movies, and so make pale imitations of what they obsessively admire, good or bad. Wood’s core failure as a film maker was not so much one of ineptitude in direction- there are plenty of successful examples of those, many lauded with shelves full of industry awards -nor in his inability as a producer to sufficiently fund the resources necessary to realize even the basic necessities of credible mise-en-scene or populating his films with performers with the minimal grade of professionalism who might properly respond to such complex concepts as a line cue. No, his fundamental defect as a film maker (essential to cementing his status in the arcane Pantheon of Cultism), what emblazons his films with a recognizable signature of true iconoclasm (if one were to subscribe to the unlikely Auteur Theory, he should be its poster boy) are his efforts as Edward D. Wood Jr. the Writer.

To read the complete review, simply click the following link to: https://chandlerswainreviews.wordpress.com/the-hollywood-bookshelf/

I've been a puppet, a pirate, a pauper, a poet, a pawn and a king, not necessarily in that order. My first major movie memory was being at the drive-in at about 1 1/2 yrs. old seeing "Sayonara" so I suppose an interest in film was inevitable. (For those scoring at home- good for you- I wasn't driving that evening, so no need to alert authorities.)Writer, critic and confessed spoiler of women, as I have a tendency to forget to put them back in the refrigerator. My apologies.
View all posts by chandlerswainreviews →
This entry was posted in 1950's cinema, book reviews, books, Culture, drive-in cinema, Film Reviews, grindhouse, how-to?, movie reviews, Movies, Reviews and tagged acting, angora, Ed Wood, Hollywood. Bookmark the permalink.