Posted on April 10, 2013 by chandlerswainreviews 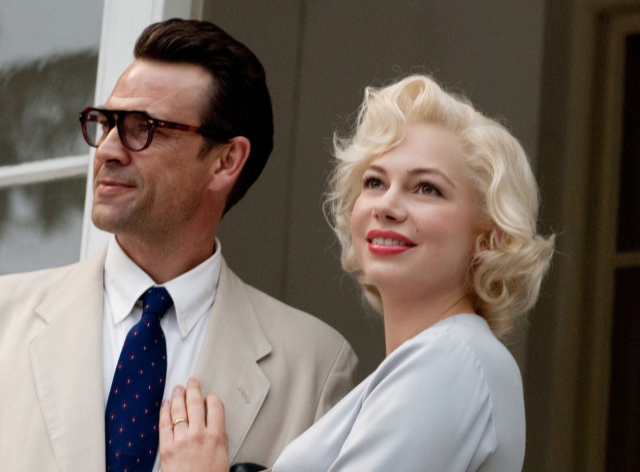 TRICK OR TREAT?:  Its the same tired story in the case of  Miller, Monroe and mimics, When Hollywood shines the light on itself, the temptation for shallow self-glorification is immense, and so rather than penetrating the hearts and minds of the creative persona,filmmakers often settle into a contented masquerade with no depth beyond cosmetically enhanced surface appearances.

“My Week With Marilyn” reacquaints the filmmaking world with an occasion to celebrate its favorite subject- itself -in an ultimately pointless exercise in dishonest nostalgia for the sake of the film world’s own self-love.  Portraying real-life personages is always a challenge for many reasons. When the effort is made for the masquerader to convincingly mimic- both physically and in mannerism 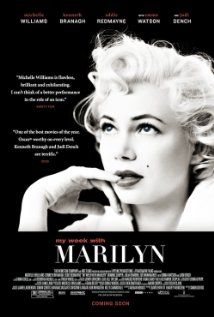 -the subject celebrity, the danger exists that the deception will result in a gaudy waxworks duplication that neither serves true to the memory of the original nor serves the portraying performer’s talents well by the limiting nature of a role that often demands little of the actor but cosmetic mimicry.

Further pitfalls may arise, as exampled in “My Week With Marilyn”, a product of published materials by later documentarian Colin Clark (here played by the vaporously uninteresting Eddie Redmayne) and follows his insider recollections of the production of Laurence Olivier’s rather pedestrian film “The Prince and the Showgirl”, co-starring Marilyn Monroe with whom Clark presumably shared a relationship that stretched beyond professional responsibilities and in which the more sexually charged suggestiveness lies the source of the film’s true interest. Since the backdrop of film production is the excuse for the current film’s existence, one might expect at least a modicum of insider’s insight into the creative process but since most of this was done outside of Clark’s privilege, there is nothing revealed of the actual filming save for a few scenes depicting oft-told instances of Monroe exasperating the director and crew with her undisciplined personal behavior- frequent tardiness and flubbed lines being the most consistent offenses.

little doubt it would have gone the more obvious route in being labelled a “teen” or “collegiate” sex comedy: the British being generally regarded as far too refined for the indulgence of such undignified libidinous escapades; and when such behavior is represented in British cinema it is generally reflected as the baser compunctions of the criminal or lower classes.   If one turns to the film for a greater understanding of the complexities of the human condition as affected by celebrity, it is a  major disappointment and a wasted opportunity, as the film seems perfectly content to easily fit itself into an insubstantial niche of intending to be of interest solely for the sake of its eponymous subject celebrity. For all of its lack of genuine depth in

its pursuit of glossy magazine surface posing, one might as well consult the saucy, barely concealed real-life representations of a Jackie Collins potboiler. The failure of the film to illuminate its person-of-interest (Is there really anyone attending to whom the drawing card is Clark?) the film then falls into another flaw consistent when the source material is from an associative memoir and that is one of a skewered perspective: the participation of the memoirist is placed centrally in the story, elevating their own importance far above what would be normally existent (if at all) in a more unbiased biographical setting. With this slanted shift, there emerges the aforementioned limitation of first-hand knowledge of more intimately entwined relationships with the people who would be of genuine interest in the circumstances (the appearance of Arthur Miller is so brief, a less attentive viewer might

easily mistake his stature in the story as commensurate to that of a set technician). By making Clark the ex post facto fulcrum of the story, we are left with the experience of the more celebrated figures through his jaded eyes alone, a worrisome situation when it is evident throughout the film that he has a fawning, almost pubescent smitten attachment to Monroe as both idealized romantic object and romantic ideal of conquest. Never is there a genuine selfless expression of concern for the actress that does not intend to advance the intimacy of his relationship with her. For a film in which the attraction is Monroe, the most honest scene in the film has nothing to do with the star, but expresses in open terms the emotional vacancy of Clark as the center of its emotional (or non, as it were) core; for when confronted by the thoughtlessly discarded wardrobe assistant Lucy (Emma Watson) as to whether his heart has been broken a little by Monroe, Clark concedes the truth of it, to which the young woman sagely (and perhaps bitterly) comments, “you need your heart broken”. The evidence that Clark, as portrayed on the screen, fails to recognize the wisdom in what he has been told summarizes the ultimate emotional emptiness of the principal characters and the film itself. Not unlike the sad figure of Olivier watching footage of the film and feeling unable to connect his classical acting style with Monroe’s apparent ease onscreen (despite Olivier undeniably being one of the wittiest actors of all time, broad comedy was not his strong suit), the film is obsessed with surface images without the prerequisite stuffing.

The set-up is a relatively simple one. Colin Clark is a twenty three year old Oxford student of the privileged class, who seeks to break with family traditions and pursue a career in his film, securing a minor position on the “The Prince and the Showgirl” production teams through familial connections with Laurence Olivier and eventually is given the assignment of watching over the troublesome blonde, primarily at her request. The tentative friendship quickly escalates into a more intimate relationship which Clark takes every opportunity to unwisely exploit, regardless of the fact that Monroe is both a married woman and very obviously in grave psychological distress.

Much has been made of Michelle Williams’ portrayal of Marilyn Monroe and although the hairdo is right, the spirit is unwilling with a performance that is sporadic at best, occasionally dead on target, but more often than not, dead on arrival. However, the most damaging act of mimicry comes with the unfortunate series of reenactments of scenes from “The Prince and the Showgirl” in which Williams is entirely insufficient, failing to remotely evince neither Monroe’s sex appeal nor her comedic sizzle; an entirely unsatisfactory situation since, though Olivier’s film is utterly mediocre, it hosts one of Monroe’s more delightful performances. Kenneth Branagh’s Olivier fares even worse, saddled with what seem to be prosthetic enhancements which cause him to resemble Patrick Wymark, a fine actor in his own right, but hardly interchangeable. The less said about the usually vibrant Julia Ormond, miscast as a dishrag version of Vivien Leigh, the better.

Only Judi Dench as Sybil Thorndyke and Emma Watson as Lucy manage to distinguish themselves in effortlessly reaching beyond the thumbnail sketches provided by scenarist Adrian Hodges for their respective roles: a few moments with either of these characters is infinitely more interesting than time spent with the principals. We may not spend a week with either of these women, but the few moments they share with the viewer on the cinema screen is time rewarded.

I've been a puppet, a pirate, a pauper, a poet, a pawn and a king, not necessarily in that order. My first major movie memory was being at the drive-in at about 1 1/2 yrs. old seeing "Sayonara" so I suppose an interest in film was inevitable. (For those scoring at home- good for you- I wasn't driving that evening, so no need to alert authorities.)Writer, critic and confessed spoiler of women, as I have a tendency to forget to put them back in the refrigerator. My apologies.
View all posts by chandlerswainreviews →
This entry was posted in British films, cinema, Culture, Entertainment, Film Reviews, Films, Laurence Olivier, Marilyn Monroe, movie reviews, Movies, Reviews, Romance and tagged biography, British, comedy, drama, Judi Dench, Kenneth Branagh, Marilyn Monroe, Michelle Williams, Olivier, romance, women. Bookmark the permalink.