Posted on March 22, 2013 by chandlerswainreviews 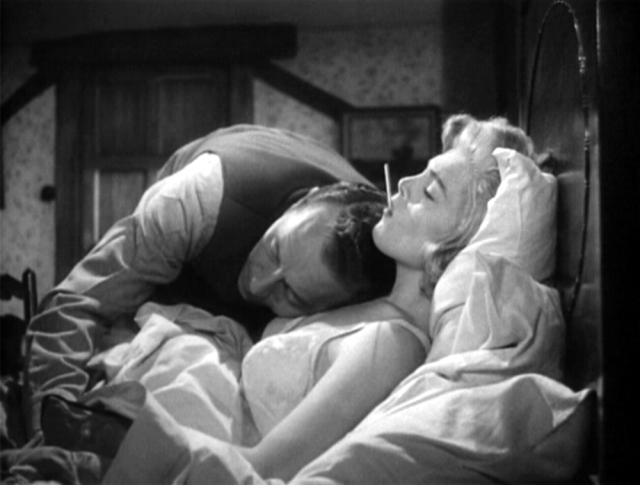 Given the fixation the studios had in manipulating audiences, is it any wonder that the “Golden Age” age cinema is awash in overly produced symphonic assaults on the soundtrack, designed to emphasize to the audience the desired way in which they are to emotionally respond to what’s in front of them, no matter how ludicrous? This is immediately apparent in the 1952 Terence Fisher film “Stolen Face” in which the soaring, hyperactive strings of Malcolm Arnold’s ferocious scoring might possibly exhaust the audience before the opening credits conclude. suggesting a maelstrom of consuming and deep dark secrets- this while identifying script continuity and sound recording technicians. Once the film settles down, we are introduced to the eminent plastic surgeon Philip Ritter (Paul Heinreid) who is introduced with great attention given in demonstrating his broad streak of altruism by following him to a women’s prison where he tests his theories of rehabilitation in correcting physical malformations in prisoners whom he feels are compelled to commit crime due to their cosmetic disadvantages. By taking the aphorism “beauty is only skin deep” seriously to lunatic levels, the logic of Ritter’s theorem would lead a woman suffering from a sudden cold sore into a spiral of felonious villainy.  Ritter meets just such a convict in the form of Lily Conover  (Mary Mackenzie), a disfigured victim of London blitz bombings who has descended into a pattern of pathological criminality. In an explosion of professional conceit always interpreted as admirable in melodramatic reel life, though in real life would be irresponsibly reckless hubris, Ritter guarantees Lily of his procedure’s success and that it will restore her life to one of vital normalcy.

Unrealistic (though characteristic of filmed melodrama) expectations aside, Ritter is presented as an impossibly humane surgeon, a man whose philanthropy (almost every one of his surgeries seems gratis though he lives in palatial opulence, leading to many unanswered questions) is balanced by his impatience of what he refers to as the “vanity” of matronly women. However, disturbing cracks in his character appear almost immediately, during a stopover at a rural inn where he encounters the lovely concert pianist Alice Brent (this unremarkable inn seems a magnet for guests of eminent stature) with whom Ritter falls into a whirlwind romance, begun by a bit of theoretically charming but  intrusively forward seduction under the guise of an impromptu “house call”, and later highlighted by the  usual montage of romantic interludes accented by frenzied musical scoring (lest the viewers miss the nuances of what is right in front of them), climaxing in a curious scene with the townspeople gathered about the tavern piano singing a boisterous rendition of “Rolling Home “, obviously a reference to the similarly rousing “La Marseillaise” scene with Henreid in “Casablanca”.

To read the complete review, simply click the following link to: https://chandlerswainreviews.wordpress.com/hammer-time/

I've been a puppet, a pirate, a pauper, a poet, a pawn and a king, not necessarily in that order. My first major movie memory was being at the drive-in at about 1 1/2 yrs. old seeing "Sayonara" so I suppose an interest in film was inevitable. (For those scoring at home- good for you- I wasn't driving that evening, so no need to alert authorities.)Writer, critic and confessed spoiler of women, as I have a tendency to forget to put them back in the refrigerator. My apologies.
View all posts by chandlerswainreviews →
This entry was posted in 1950's movies, cinema, Culture, Entertainment, Film Reviews, Films, Hammer films, movie reviews, Movies, Reviews, Romance and tagged drama, film noir, film reviews, Hammer films, Lizabeth Scott, Paul Henreid, Terence Fisher. Bookmark the permalink.