Posted on December 24, 2011 by chandlerswainreviews 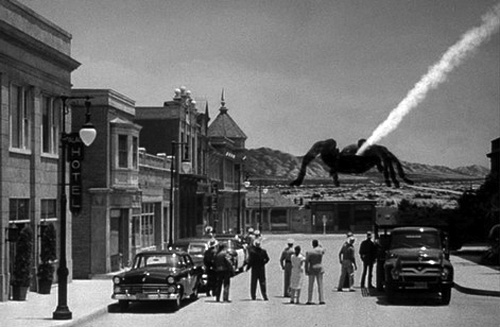 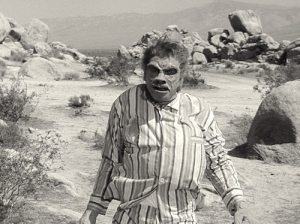 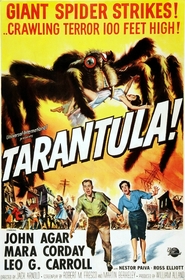 the seeds of a mystery which will lay the foundation for some subtle tinkering with the  rapidly established conventions of 1950’s Atomic Age science fiction cinema. In this context of this seemingly innocuous pre-title scene, Arnold illustrates the film’s thematic duality: the quietude of the natural environment (Nature) intruded upon by Man (Science) who corrupts that environment, setting in motion the most elemental survival mechanisms with which Nature re-balances itself. In many ways, it is Shelley’s Modern Prometheus theme all over again (as most Earthbound SF inescapably tends to be) within the framework of a B-picture, that rises above it’s minimalist genre foundations into an interesting meditation on the reliability of the outwardly rational Scientific mind.

Jack Arnold was a marvel as gathering disparate elements from the genre cliché catalog and investing them with novel levels of narrative and character nuance that magnified the appearance of richness in even the most threadbare scenarios. Even a cursory look at the exquisite balletic lagoon swim sequence between Julia Adams and the monster in “Creature From the Black Lagoon” with its subtext of eroticism spanning prehistoric eons, demonstrates that Arnold is interested in far more than simply by-the-numbers matinee spook show thrills. His masterwork, “The Incredible Shrinking Man” takes the context of 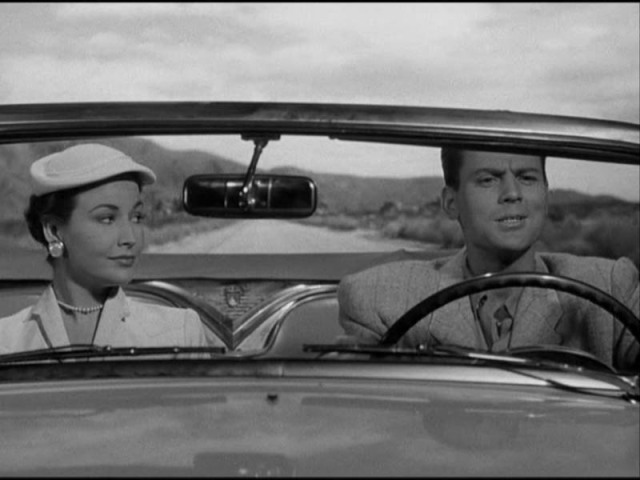 the film’s SF themes to a logical extension where the horrifying journey the protagonist Scott Carey has taken is seen as only the beginning of both a physical state of oblivion and a spiritual state of Grace in which Man divines his true place in the Cosmos. Never before had a “b-movie” been so imbued with such a radical foundation in the philosophic.

With the 1955 film “Tarantula”, Arnold creates the apotheosis for 1950’s Atom Age big bug gigantism, as it not only satisfies the requirements of the genre suspense elements with impressive economy, it also intelligently incubates themes which surreptitiously leap well past the formulaic characteristics of the genre. Unlike 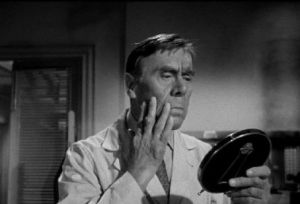 most of its antecedents including the seminal “Them!” and the Harryhausen enhanced “The Beast From 20,000 Fathoms”, “Tarantula” approaches the era’s atomic paranoia in unusual directions of moral complexity. Typically this genre of thriller is based on a self-effacing conceptual principle in which the hero is portrayed as a man of science (usually ably assisted by either or both a perky, oversexed female assistant or fellow scientist, and/or a military authority) who works furiously to find a technological solution to impending destruction, but is also a member of the same scientific community which must ultimately assume responsibility for unleashing the menace in the first place; Atomic bomb testing being a favorite scapegoat in these

films, even to the point of being derided by the Assistant Secretary of the Navy in 1955’s “It Came From Beneath the Sea” with the dismissive, “H-bombs have been blamed for every freak accident that’s happened since, up to and including marine monsters being disturbed.” Since the advent of nuclear technology, the machineries of Science have increasingly perplexed and frightened a suspicious public, especially in the post-War years where such technologies were advanced by the American Government to ferment Cold War anxieties with the idea that at any moment such devices could be used against the average American by our political enemies. Naturally, the harbingers of such 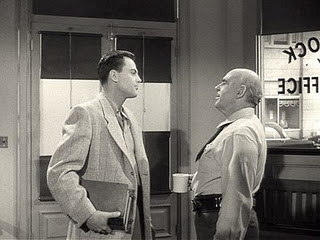 breakthroughs would be looked upon with suspicion, even while they were granted the somewhat contradictory role of the savior. However, there is a new twist in Arnold’s film as the root cause of the menace may still be linked to radioactivity, but here the intentions of the experimentation are altruistic, not destructively militaristic. Still, it does follow the pattern of the Frankenstein legacy with a man of science intruding into the realm of Godlike control over his environs, though unlike the scientists of past films, Leo G. Carroll’s Professor Deemer is not “mad” but truly an idealistic man of science, who is attempting a breakthrough in cheaply produced nutrients to stave off the famine he sees will inevitably occur from world overpopulation, but naive (almost to the point of deliberation) to the possible side effects of artificially altering the balance of Nature.

It is Nature itself which is depicted as the combative antagonist, with the giant tarantula merely as a representative surrogate for the untamed forces of the natural world. (It is never explained why in testing his formula Deemer would use a tarantula, except out of sheer screenplay contrivance. One only has to regard the poor example of “Night of the Lepus” to convince that giant lab rabbits are a poor substitute in generating thrills in the SF/horror field.) In this context, the desert backdrop serves a multiple function, as a setting of inhibiting geographic

isolation and as a source of the profound mysteries of unknowable natural history both wondrous and dangerous. There are several occasions in the film in which these very characteristics are made pointedly clear in expository dialogue. In the first scene Dr. Matt Hastings, referring to a new birth, speaks of the romantic nature of the setting, saying: “It’s the desert. Gives people wonderful ideas.”

Later on in conversation with lab assistant “Steve” Clayton, he reinforces the view of desert as both Nurturer and Nemesis, a source of both awe and trepidation-

Steve: “No wonder you love the desert, it’s so beautiful.”

Matt:  “Everything that ever walked or crawled on the face of the Earth, swam the depths of the ocean, soared through the skies, left it’s imprint here.”

And later, when Steve inquires about the desert view from the air-

Matt: “It’s like something from another life, serenely quiet, yet strangely evil as if it were hiding it’s secrets from Man.”

Matt: “The unknown always is.”

This is a significant statement, as Matt Hastings himself is a man of science, though he self-deprecatingly calls himself “a country doctor” in comparison to the more esteemed 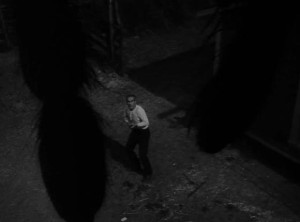 Prof. Deemer, yet he displays a far more sensible view of the fragile links between the scientific and both its ennobling and possibly destructive effects on the community. Deemer, on the other hand, represents what is meant to be the elite of the scientific community. Whereas Hastings works within a communal building in the heart of the town, freely socializing with fellow members of the community, Deemer is isolated, living in a large house surrounded by the barren landscape in which he unknowingly unleashes the deadly spawn resulting from his experimentation. Hastings openly concedes mystification at the peculiarities within the narrative- (as in this dialogue following a mysterious rock slide)

Steve: “Something must have started it.”

Matt: “You can’t second guess the desert. Rocks that have stayed for a thousand years… they just move. There’s no figuring it.”

– while Deemer professes a complete understanding of the film’s unexplained phenomena , despite the fact that he is knowingly obscuring facts of the questioned happenings in the service of advancing his personal agendas.

In essence, the polarities of the scientific mind are laid bare as obstinate counterpoints eventually leading to the film’s climactic collision. Deemer as the remote symbol of scientific efficiency, works for the theoretical benefit of Mankind as long as it coincides within the boundaries of his self-constructed view of intellectual (and thus, in his view, moral)  superiority. The workaday Hastings is a man of science as healing physician, directly applying his scientific knowledge in active, not theoretical, benefit to the community.

The two main threads of the film’s story- the story of Professor Deemer and his attempts at nutrient development, and that of Hasting’s following the trail of arcane clues left in the wake of Deemer’s mutated arachnid progeny (which, significantly, the 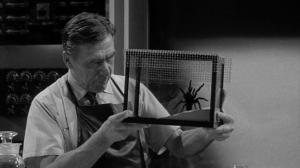 Professor assumes was destroyed in a lab fire)- are bridged by a  third narrative line following the budding romantic attraction between Hastings  and Deemer’s new lab assistant, the formulaically necessary sexy female, Stephanie “Steve” Clayton (Mara Corday). It is through their rather charming courtship that the disparate threads of the film’s mysteries begin to clarify themselves. The role of Steve is happily more advanced than the average SF feminine appendage, as she compliments the development of both Deemer’s humanistic and Hasting’s philosophical character facets, as well as acting as a happy medium between 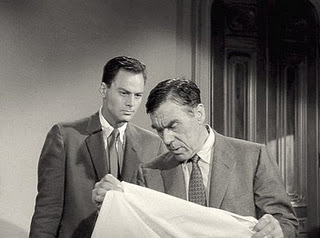 the two combative viewpoints toward science. On the one hand, she is an enthusiastic contributor is Deemer’s research, equally as enamored of his academic standing as is Nester Paiva’s rather thick town sheriff- who by his concession to the Professor’s status has allowed events to blindly unravel out of control- but is also graced with the candor of a more pragmatic view (unlike Deemer’s arrogant blindness) which allows her to concede a most important point about the experimental nutrient, that “when unstable, it’s been known to be deadly”; an important bit of information that oddly generates no investigative curiosity from Hastings. Steve also is the only character to make inquiries about a former assistant to Deemer, a Paul Lund, who figures importantly in the film’s development- and Demmer’s impending mortality – and is the catalyst for Deemer’s behavior to finally cross over into criminal behavior.

For a film about the nature of science to Man, the actual science is fairly slipshod- an expected, though unwelcome characteristic of virtually all science fiction films. It is never adequately explained how a dangerous radioactive isotope can be used as a binding and 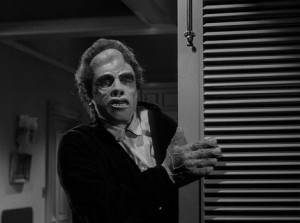 triggering agent for the nutrient without being fatal to its living hosts, nor is there much adherence to genuine physical laws of science, though this is especially indicative of the entire genre of giant monster films as they are a breach of the very idea of the square-cube law. Or the fact that the immense arachnid is impervious (as are all of the 1950’s beasts of mutated proportions) to not only high explosive charges but high voltage electrical charges as well. (This is always explained away in Gojira films as the daikaiju having natural armored plating, though the last time observed, tarantulas are not so opulently equipped.)

For a film of a meager running time of 81 minutes, its multiple story threads unfold at an unhurried yet tightly constructed pace, Arnold displaying a mastery of uncomplicated, streamlined storytelling, ably assisted by a tight scenario by  Robert M. Fresco & Martin Berkeley which, as previously mentioned, accentuates telling character developments supportive of the philosophical underpinnings of the story while intelligently paring down the specific characteristics of this specialized genre to its essential components. The cast, filled with familiar studio roster players, acquaints itself admirably with a genuinely appealing, though happily unsentimentally developed chemistry emerging between Agar and Corday. Clifford Stine’s special effects creations, an interesting mix of live action and perfectly matched miniatures are impressively realized, a superior enactment of the giant bug illusion than its counterpart in the seminal and much lauded “Them!”.

A solid, smart little thriller approachable by anyone not prejudiced by its surface drive-in, B-picture roots. 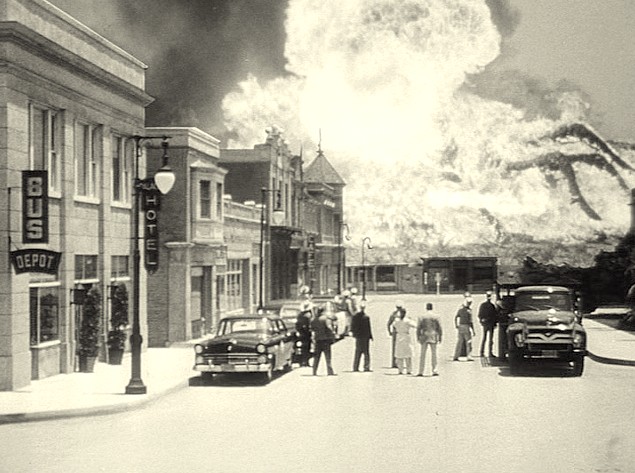 I've been a puppet, a pirate, a pauper, a poet, a pawn and a king, not necessarily in that order. My first major movie memory was being at the drive-in at about 1 1/2 yrs. old seeing "Sayonara" so I suppose an interest in film was inevitable. (For those scoring at home- good for you- I wasn't driving that evening, so no need to alert authorities.)Writer, critic and confessed spoiler of women, as I have a tendency to forget to put them back in the refrigerator. My apologies.
View all posts by chandlerswainreviews →
This entry was posted in 1950's movies, drive-in cinema, movie reviews, Science fiction films and tagged culture, Entertainment, film, Movies. Bookmark the permalink.